A SLAP IN THE FACE! Jamaican Vacationer Said She Felt Humiliated When Airline Asked Her To Cover Up In a trending news story, Dr. Latisha "Tisha" Rowe, an African American vacationer to Jamaica, was reportedly humiliated after was told she couldn't fly unless he covered up her romper! She was returning from Jamaica to the US with her son after a one week vacation.

In a tweet that has is now viral on social media, Ms Rowe said, "Here is what i was wearing when @AmericanAir asked me to deplane for a talk. At which point I was asked to “cover up”. When defending my outfit I was threatened with not getting back on the flight unless I walked down the aisle wrapped in a blanket".

"To me, that felt like a slap in the face, because I felt appropriately dressed," she reportedly said to the CNN. 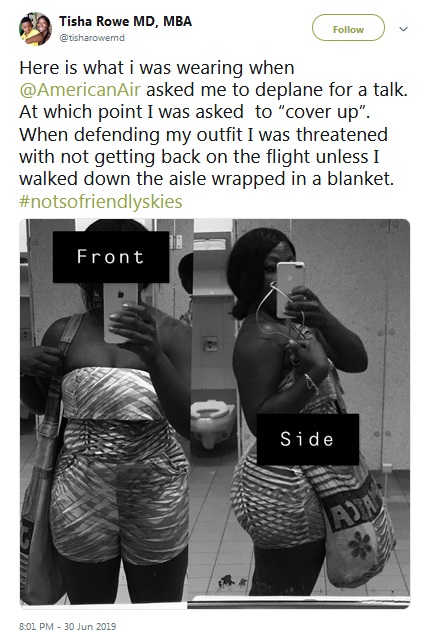 According to CNN, Ms Shannon Gilson, a spokeswomen for American Airlines, indicated that...

"We were concerned about Dr. Rowe's comments, and reached out to her and our team at the Kingston airport to gather more information about what occurred. We apologize to Dr. Rowe and her son for their experience, and have fully refunded their travel.

We are proud to serve customers of all backgrounds and are committed to providing a positive, safe travel experience for everyone who flies with us, (source)"

She noted that the company is investigating.

Dr. Tisha Rowe, a native of Miami, who reportedly indicated on her LinkedIn page that she is 'not your average doctor', achieved her Bachelor of Science in Psychobiology from the University of Miami in 2004. From there, she attended Temple University where she obtained her Doctorate of Medicine.

She did her residency at Baylor’s College of Medicine in 2012, specializing in Family medicine (source).

Her travel expenses were reportedly refunded.
Ms Rowe had written a book, "B Is for Bossy" which she publicized on Instagram in the aftermath of the American Airlines incident.

Ms Rowe's twitter profile reads "Doc thinking outside the box. Chaseys mom. Founder of @rowedocs Creator of @bossdoctors what God has for me, it is for me! #rowedocs #telemedicine 👸🏾#grateful".

Meanwhile, in another tweet, Ms Rowe commended the Jamaican government for 'for the amazing changes' happening in the country. She said she was proud to have her son see where his roots began. See tweet here.

So what do you make of this story? I welcome your feedback here.