History Of Education In Jamaica 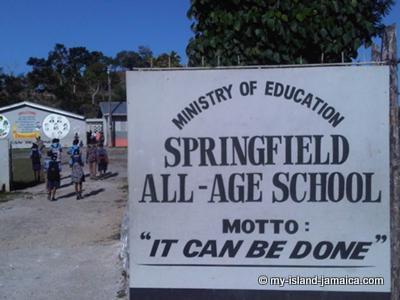 However, there are no Primary Schools with Grade 9 classes!!!
Historically, these schools were called 'Elementary Schools'.

It was some time about in the mid 1900's that there was a name change to All Age Schools. During the 1990's , there was a shift in thinking and some of these schools were renamed Primary and Junior High Schools. Still from grade 1-9.

Primary schools are from Grade 1-6. with ages 5+to 12+. By The Education Code, a child may attend a Primary School from 5 years and 6 months old.

Another thing Sir, Formal Education, in Jamaica, begins at Grade 1!!! And, it was during the period of time, from the mid to late 1960's to the early 1970's , when the 'New Secondary Schools' were built and began to operate, that 'Primary Schools' became a popular name in Jamaica.

You see sir, when these new schools were first opened for business, the grade 7-9 students from the the All Age Schools
went over to form the student cohorts in these New Schools. Hence, from the respective years of the changes taking place, Primary-School as a separate entity was made popular.

Then these and the 'Prep' Schools were, and still are at the same level. You see Sir, These things were going on during the Common Entrance era.

Therefore, each year, the students who failed to

gain a 'Free Place' in a High School, became 'feeder students' at a N.S.S.

The students who remained in the All Age schools still had access to the Technical Entrance Examination, In grade 7 or in grade 8, and the Grade Nine Achievement Test, in grade 9.

Success in the T.E.E. would place a student in one of the 6 T H S's, until in the 1970's, when two(2) additional Technical schools were added to the fold.

Success in the GNAT would take a student to 3rd Form, in one of the several high schools, or into a Technical High. Another place could have been in a Trade Training school in Hanover for boys or on in St. Mary for girls.

However, ever since the "Renaming" and not "Upgrading" of the Secondary Schools to High or Technical High Schools, the GNAT has become a "Placement Examination", just as how the GSAT has been doing. No longer is there Pass/Fail!!! Everyone is being placed.

My friend, your first name is the middle name of my 3rd brother!

Until such time, one love and be blessed in all you do.
Vern M. Brown

I never knew all that! Good (and timely) learnings indeed! Thanks a lot. I will certainly be sharing.

I typically invite my ardent website fans to share their feedback here, so watch the comments below.