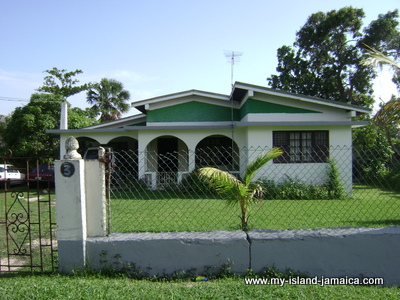 An average Jamaican house in Westmoreland


Globalization continues to make most places homogeneous - almost carbon copies of each other, and as such even houses may no longer reflect the culture and history of a specific place; a high rise in California looks a lot like a high rise in Seoul.

Luckily there are still a few places where a reverence for ancestry has kept the architecture retaining a unique flair that showcases the history of the country or culture, and Jamaica is still one of those places.

Jamaican houses reflect the influence of the different colonial powers that have ruled over the island nation. The original inhabitants of Jamaica, known as Arawaks, most likely immigrated from Latin America.

After Christopher Columbus 'discovered' the island in 1494 during his voyages financed by Spain, Jamaica was officially colonized by Spain in 1509.

Spain and England battled for colonial dominance of the New World for the rest of the century and beyond, and after a naval battle in 1655, the English defeated the Spanish fleet and took control of the country.

During the end of the 1600’s trade routes became big business, and the English brought many Africans to Jamaica to work as slaves harvesting the bountiful harvests known to the island.

Although the country was officially established as a free nation in 1962, the styles of Spain and England and the colorful flair of Africa can be found in the architecture of homes in Jamaica. Due to the trade routes, Jamaica was a wealthy nation before the end of slavery on the island, which dismantled the economy.

While the country has a mix of Jamaican Vernacular, British Colonial, Victorian, Georgian, and Jamaican Georgian style homes, Georgian homes are among the most popular.

Falmouth in particular was a hub, and the island town still retains a treasure trove of beautiful Georgian mansions, many in rich colors, a popular combination of island beauty and English charm. Many Jamaican houese to this day, while smaller in scale, reflect this trend across the island.

While Jamaica always had poorly constructed wooden homes among the more substantial homes, the majority of homes in Jamaica today are constructed with sand, concrete, cement and steel instead of wood as these materials are better for the tropical climate.

A concrete pink Victorian sounds like a catastrophe, but in Jamaica it just works because of protection from hurricanes. Whether small or large, Jamaican homes are truly a representation of the multicultural history an flair of Jamaica and it's people.