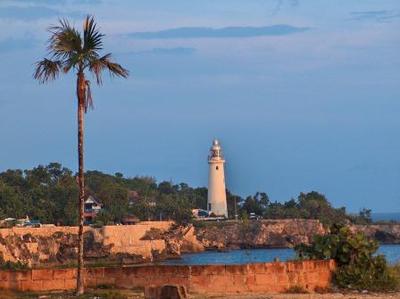 Lighthouses are majestic edifices that seemingly light up magically to guide seafarers. They were much more important in the past but now they are recognized mostly for their historical value.

Jamaica has seven lighthouses across the island, all with their own unique characteristics. Did you know that Jamaica is home to the tallest lighthouse in the Western Hemisphere? Do you know which lighthouse is a part of Jamaica’s most popular romantic mystery? Continue reading to find out!


Did you notice that each lighthouse has a different time between flashes of light? This actually is an identification signal. Did you know that the light helps the traveller to calculate the distance from land? Imagine that!

Have you ever wondered if lighthouses work in the daytime? Me too. Actually, there is a “daymark requirement" so lighthouses are carefully painted to be conspicuous in the daytime; lighthouses on the shore are usually painted white and in the open sea or against a light background contrasting colours in bands of (usually) red or black, are preferred.

Lighthouses used to have keepers but nowadays the use of lighthouses have somewhat dwindled due to the use of more advanced, computerised technology to guide seafarers.

These lighthouses however are important to the architectural history of the island and are protected by the Jamaica National Heritage Trust and are also in the care of the Jamaica Port Authority.

While there are talks to convert these lighthouses into fully operational attractions, only the Lover’s Leap lighthouse has been converted.