"Up, you mighty race, accomplish what you will." - Marcus Garvey 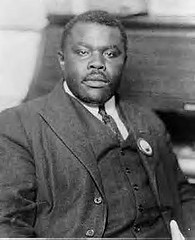 From an early age, my own family members called me Marcus Mosiah Garvey (pet name is Mark). I had no idea what it meant, except that I felt it was an expression of love and affection towards me.

It was not until my late primary (prep) school years that I realized how powerful this esteemed man was.

Jamaica's first, of seven national heroes, Marcus was born in St. Ann's Bay on August 17, 1887. His father, Marcus Mosiah Garvey, Sr., was a mason and his mother, Sarah Jane Richards, a domestic worker and farmer. Of his eleven siblings, only Garvey and his sister, Indiana, reached maturity.

In his youth Garvey migrated to Kingston where he worked as a printer and later published a small paper "The Watchman".

During his career Garvey traveled extensively throughout many countries observing the poor working and living conditions of black people.

In 1914 he started the Universal Negro Improvement Association (UNIA) in Jamaica. The UNIA, which grew into an international organization, encouraged self-government for black people worldwide; self-help economic projects and protest against racial discrimination.

In 1916, Garvey went to the USA where he preached his doctrine of freedom to the oppressed blacks throughout the country.

However, USA officials disapproved of his activities and he was imprisoned, then deported.

Back in Jamaica in 1927, he continued his political activity, forming the People's Political Party in 1929, He was unsuccessful in national elections but won a seat on the Kingston and St. Andrew Council (KSAC).

But the world of the 1930s was not ready for Garvey's progressive ideas. He left Jamaica again, this time for England where he died in 1940.

His death came after a stroke, apparently after reading a mistaken, and negative, obituary of himself in the Chicago Defender. His body was brought back home in 1964 and buried in the National Heroes Park in Kingston.

Three of his most admired quotes are:

Garvey is best remembered as an important proponent of the Back-to-Africa movement, which encouraged those of African descent to return to their ancestral homelands.

This movement would eventually inspire other movements, including the Rastafarian movement, which proclaims Garvey to be a prophet. Garvey said he wanted those of African ancestry to "redeem" Africa and for the European colonial powers to leave it.

His legacy can be summed up in the philosophy he taught - race pride, the need for African unity; self-reliance; the need for black people to be organized and for rulers to govern on behalf of the working classes.

So you see why I am proud to include him in my top 30 list of famous Jamaicans. Please also visit my page on the national heroes of Jamaica for information on the other heroes.

For an entire feature on Marcus Garvey, take a look at this page.