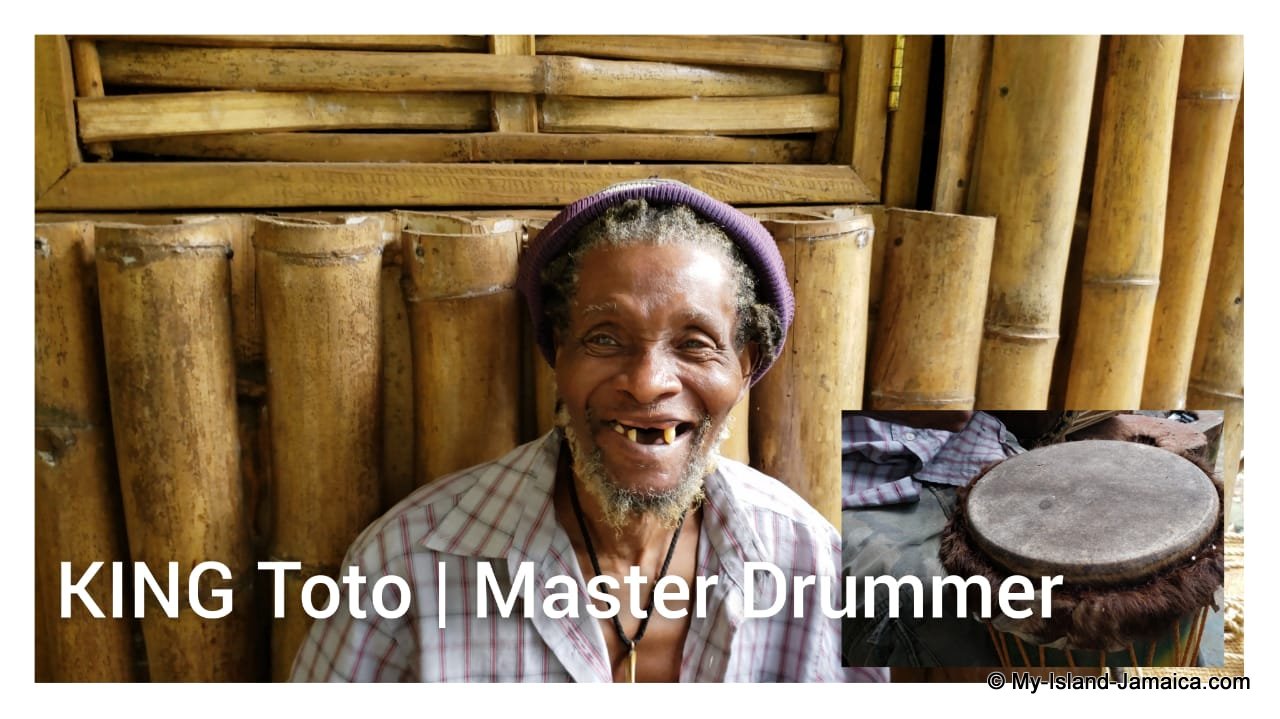 If you ever happen to sought someone who, despite the daily conflicts, chaos, complications and confusion, is totally at peace with himself, free, as he said in his own word... I know one.

A few days ago Linda (I know you'll be reading this Linda), one of my ardent subscribers reached out to me asking me about a Djembe drum.
I had absolutely know idea what that was, except that it supposedly a drum :-)

So the fact that it is a drum and I know the connection between the Rastafarians and drumming, I reached out to Queen I, a friend of mine in the Rasta Indigenous Village.

Lo and behold, not only do they have it, they make them there! All types, and all sizes!

But all that is done by only one man there, and according to him, one of the few traditional drum makers in Jamaica today.

His name is King Toto, and yes, he's the same person I mentioned to you earlier.

I had the privilege to spend some time with him there, where, not only did I get to learn about the 'powerful' Djembe drum, I also learned quite a bit about him, his inspiration and yes, about several of the other drums that he 'manufactures' - with his bare hands!

The Djembe drum, pronounced 'Jembe', was actually invented in Africa back in AD 1200 and is not only used for religious and ritualistic purposes but also for communication. Today it is a key feature in Jamaican music, from Mento to Reggae. According to Ras Toto, it can play up to half a dozen different tunes - amazing!

He has a distinguished history of playing on some of the biggest stages in Jamaica, including Reggae Sunsplash, and is known by persons from all over the globe. But today he live a very simple life in the Rastafari village... making drums, that's it.

According to him, he doesn't leave the village, not even to the doctors!
In total, I spent about an hour with him and I learned oh so much.

You'd be proud of me if I tell you I can now differentiate the funde (fundeh) drum from the kette drum, from the bass drum and yes, the djembe drum :-)

He was quick to point out that it is indeed hard work to make the drums, especially since he uses his bare hands.

But nothing, according to him, is more satisfying than doing what you love... therefore making it a game rather than work.

But my biggest learning was the beauty, happiness and peace in living a simple life! He is the epitome.

Before I completed the interview I asked him my favorite interview question... 'What makes Jamaica special?'.

His response, in a nutshell, was the freedom that he has here! Something that we sometime take for granted... I absolutely love it.

And I have good news for you... I have the complete interview (well the key parts at least) on YouTube. I recently premiered it.

Here is it (embedded) below: