Who Is Merlene Ottey?
The Jamaican Track Star? 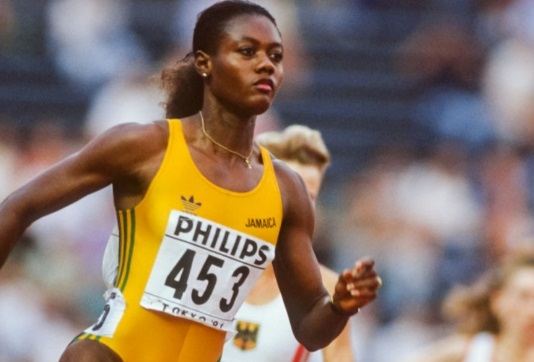 Undoubtedly Jamaica has been dubbed the “Sprint Capital of the World”. With several medals, world records and the title of the World’s Fastest Man and Woman under our belt, we have been seen as force to be reckoned within the field of athletics.

The island has produced quite a number of track stars that have dominated and helped to reform the sport.

However, if we rewind the clock, we’ll realize that it didn’t just start with them. Many before them have waved the black, green and gold flag proud.  One such is Jamaica’s most decorated athlete Merlene Ottey.

Merlene Joyce Ottey was born on May 10, 1960 to Hurbert Ottey and Joan Ottey in the community of Cold Spring, Hanover, Jamaica.

Ottey was the fourth of seven children for her parents. Her remarkable talent in tracks was evident from a young age, as she won several local meets.

It was this spark of potential that prompted her mother to accompany her to Kingston to compete in a meet.

This specific track meet would select the team to represent Jamaica at a meet overseas. Since they had no friends or family in the Kingston area, the two had to resort to sleeping at a police station.

Ottey triumphed at the meet, winning gold medals in the sprints and the 4 x 100- m relay.

Her sprinting career began to take-off when she moved to the United States to attend the University of Nebraska. There she joined the track team. She represented the black, green and gold at the 1979 Pan American Games where she won the bronze medal in 200 m.

Merlene Ottey recounted the first time she heard about the Olympics. During the 1976 Olympic Games, Jamaican Donald Quarrie was the talked about athletic star contending for a gold medal.

The excitement surrounding the event caused Ottey to set her eyes on participating at the Olympics. “If they make such a fuss about one athlete, I definitely want to be there” she expressed.

She made her Olympic debut at the 1980 Moscow Games where she took the bronze medal in the 200 ms. Not only was she the first Jamaican female athlete to win an Olympic medal, but she was also the first female athlete from the English-speaking Caribbean to win a medal.

Despite being injured, she participated in the 1988 Olympic Games in Soeul, finishing fourth in the 200 m race.

The 2000 Olympic Games in Sydney saw Ottey gaining a silver medal in the 4 x 100m relay race and placing fourth in the 100m.

However, the happenings leading up to the meet proved to be a very perplexed time for the athlete. In August 1999 the sprint queen had tested positive for the banned anabolic steroid nandrolone.

Ottey fought to clear her name and in the summer of 2000 the International Associaion of Athletics Federation (IAAF) cleared the athlete of the drug charge at arbitration. The three-man panel ruled that the laboratory at Lausanne failed to take into account the concentration of the urine sample.

They ruled that the nandrolone did not exceed the International Olympic Committee (IOC) limit of five nannograms per millilitre.  However, she had to the face another difficult hurdle, the National Senior Trials.

After placing fourth in the trails, she only qualified for participation in the 4 x 100m relay. However, a determined Ottey believed that the JAAA should give her the go ahead to run the race, a similar courtesy it had extended to others in the past.

Weeks prior to the 2000 Olympic, Ottey clocked two sub-eleven second times making her the fastest Jamaican female sprinter. This lead JAAA to give Ottey the go ahead to run the race at the expense of upcoming talent, Peta-Gaye Dowdie.

This decision, however, did not sit well with the rest of the team. They believed Ottey should have allowed the younger talents to compete and showcase their abilities. This resulted in the notorious Games Village protest to oust the sprint queen.

The protest was short-lived however, after the team was threatened by the IOC to be thrown out if they did not end the protest. Despite being given the opportunity to run, the experience left a bitter taste in the mouth of Ottey.

This is was the last Olympic Games where Ottey represented Jamaica.

“After Sydeney I said I wasn’t going to run another race for Jamaica…because I felt like the Jamaicans were trying to push me out of the sport and I really needed to prove my point, that I might be 40 but I can still run”, she expressed. She further went on to elaborate that if she could find another country to run for, she would.

Upon receiving Slovene citizenship, Ottey began representing Slovenia in May 2002. The 2004 Athens Olympic Games saw Merlene Ottey competing at the event for the final time. Representing Slovenia at the age of 44, she only managed to qualify for the semi-finals in the 100 m sprint event.

Ottey continued her sprinting career and in 2006, at the age of 46, she competed in the European Championships finishing fifth in the 100m semi-finals. Despite her efforts to compete at the 2008 Olympics, she failed to qualify. However, this did not deter her from competing.

The Legacy Of Merlene Ottey

Although some may view her failure to achieve an Olympic gold as a mar on her athletic career, even earning her the nickname “Bronze Queen”, Merlene Ottey has been renowned as an extraordinary athlete whose stellar career has chronicled the sport of athletics for several years.

Despite the ups and downs and numerous setbacks, Ottey held steadfast with an unwavering spirit.

Described as an illustrious career, she won eight medals at the Olympic Games and 14 World Championship medals. She has three world title, two individual records form the 1993 and 1995 staging of the event, both over the 200m and another in 1991 with the Jamaican relay team.
She was also the first female to run under 60m indoors event in less the seven seconds.

Due to her outstanding achievement in her first Olympic appearance, she was awarded the National Honour of Officer of the Order of Nation, and the Order of Distinction. After her 1993 World Championship gold medal win she was named Ambassador of Jamaica.

She was awarded Jamaica’s Sportswoman of the Year Award 15 times.
Also, a statue of her likeness can be found in the Independence Park.At the end of her career, Ottey had the most Olympic and World Championship medals for a female athlete.

by Claire Forrester. Click Here To See The Latest Price on Amazon.