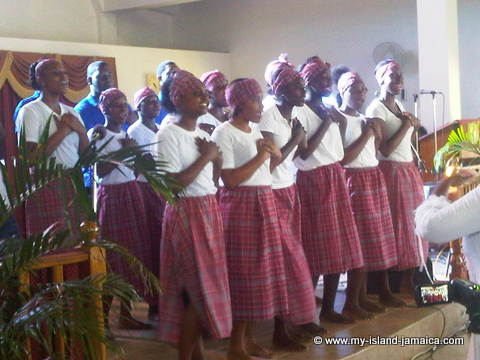 Traditional Jamaican Clothing Styles are Part of Our Heritage

One of the many ways in which the rich, cultural heritage of the island of Jamaica is expressed is through the traditional styles of clothing, some of which are still worn today.

The colourful apparel of the Jamaican people is the result of the combined influence of the various cultures that have left their mark on the island over the past several centuries. Many believe that these fashions possess a breezy, carefree vibrancy which closely matches the spirit and attitude of the island's people.

What is the National Dress for Jamaica?


The recognized national dress for Jamaica is a women's ensemble known as a quadrille. It is worn during a dance performance of the same name.

The dress consists of a calico, tiered, bandana skirt made from lightweight cotton, a blouse with short , ruffled sleeves, and a head tie which is made from the same calico fabric as the skirt.

Typical colours for this plaid-like calico are either maroon and white or red and white. Males will wear shirts of this same fabric with white pants when performing this folk dance. While this attire is only worn today for performances, it is made to resemble that which was typically worn in 18th century Jamaica, as a sort of tribute to the island's history.

What are Traditional Daily Attire for Women and Men?

Clothing styles for women and men have been traditionally made from light, woven fabrics which are hand-made by locals. Although nowadays, a wider variety of materials are used in clothing manufacture, many of which are imported from other countries.

Typically men wear either long or short pants, along paired with a short-sleeved shirt, and women wear a long-flowing dress, or long skirt and blouse, coupled with a headscarf to contain their hair. The chosen colours of these garments are usually vivid and bold, and they are meant to represent the colourful and lively land and spirit of the island.

Is Modesty Important in Jamaican Fashion?

Yes it has been traditionally, and continues to be today. Jamaica was once a colony of Great Britain, which is well-known for its modest manner of dressing, a habit that was adopted by Jamaicans.

It is customary to dress in a way that reveals less skin, rather than more. Shorts, swimsuits and such are acceptable for the beach, but in town, most people wear long pants or skirts that cover their legs, and shirts with sleeves. Many buildings even have dress codes enforcing these values.

What Else has Influenced Jamaican Clothing Styles?

The Rastafarian culture has certainly had a big influence on many aspects of Jamaican culture, clothing being just one of them.

Also made from natural fibres such as cotton, and linen, Rasta fashion tends to feature the colours green, red, and gold which are from the flag of Ethiopia, home of King Haile Selassie, the founder of the faith.

Knitted hats called tams are another popular item in the Rasta-inspired wardrobe, these were originally worn to contain a headful of dreadlocks, the traditional hairstyle amongst followers of this religion and others as well.