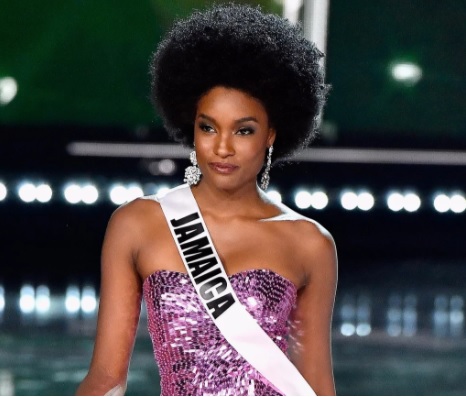 Jamaica, the land of beauty in so many respects, has secured yet another top 10 spot in the prestigious Miss Universe pageant!

This when Clarendon's own hometown girl, Davina Bennett, secured the exclusive 2nd runner up spot in the 2017 edition on Sunday night at THE AXIS in Las Vegas, USA.

While the elation spread quickly across Jamaica, according to the Jamaica Observer, it was pademonium and jubilation in Mitchell Town, her home town.

“There was a lot of pot cover beating. It was like when Bolt win the 100-metre race and break a record!”

The twenty one year old, who works with deaf students, had Jamaicans at home and abroad celebrating from the time she came on stage, through to her selection to the top 16, 10, then the top five - and ultimately the top three.

Her signature afro hairstyle has won was a beautiful sight to behold - and cememted her in the hearts and minds of many across the globe.
And this top 3 feat was even more special as she emerged from a list of 92 contestants, the largest in the history of the competition.

Davina had earlier won the local competition to become Jamaica's representative in this famed international event. For more on this and Davina's background, including the challenges she overcame, read this gleaner article.

Bway, mi proud a her! Mi feel good! I welcome your comments here.