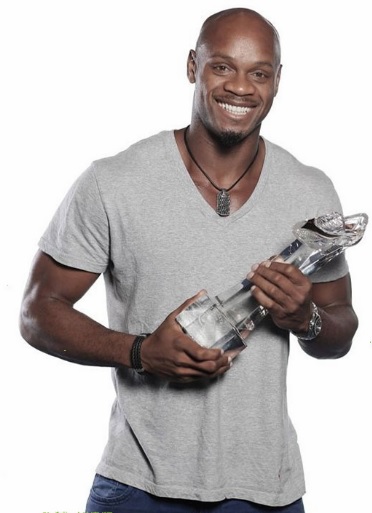 Asafa Powell is a testimony to the sporting prowess of Jamaica in athletics. He has demonstrated the spirit, passion and integrity of a true Jamaican.

After setting the world record three times in a row, it seemed Asafa would be untouchable for many years to come.

The Latest On Asafa

Since this initial publication, Asafa Powell featured in, and won several other athletic meets. He has also been busy engaging in business and charity initiatives.

For the very latest on Asafa, please visit his website at http://iamasafa.com/

You may also visit his page on Wikipedia for an impressive bio.

However when he suffered the ignominy of being 'the other athlete' disqualified for a false start in the quarter-final. This was when Jon Drummond memorably refused to leave the track having suffered the same fate, both athletes moved less than 0.1 seconds after the gun had fired, with Powell being timed at 0.086.

During the 2003 season Powell won 2 IAAF Grand Prix events, 1 of which was a Golden League event.

The following season, Powell was one of the favorites for a medal at the 2004 Olympic's 100 m race in Athens, after winning the Jamaican National Championships with a personal best time of 9.91 s.

Although he ended the season with a record-equaling nine sub-10 second runs, Powell finished just fifth in the highly competitive Olympic final, with a time of 9.94 s.

Following this he pulled out of the 200 m final, even though he had already qualified for it earlier on. He recorded 5 IAAF Grand Prix wins in 2004, in addition to winning the 100 m race at the World Athletics Final.

In 2005 Powell again won the 100 m Final at the Jamaican National Championships. He gained some consolation for his Olympic performance by breaking the 100 m World Record in Athens on June 14, 2005, setting a time of 9.77s.

2006 was Powell's most successful season. In addition to winning the 200 m at the Jamaican National Championships, he won ten 100 m IAAF Grand Prix events, including a 6-for-6 performance in the Golden League events.

Powell himself ran into another competitor's lane while looking at the scoreboard, however he was held not to have impeded the runner. He also anchored the 4 x 100 m relay team, and finished the Commonwealth Games with two gold medals.

Powell was again the Jamaican National Champion for the 100 m in 2007. However, he only managed to finish 3rd in the 100 m final at the 2007 World Championships in Osaka, Japan behind Tyson Gay, who was considered Powell's biggest rival building up to the Championships.

On September 9, 2007, in the opening heats of the IAAF Rieti Grand Prix in Rieti, Italy, Powell ran a new World Record time of 9.74 s (+1.7 m/s) in the 100 m, thus fulfilling the promise he had made earlier after his bronze medal in Osaka, that he would break the record by the end of the year.

Powell's 2008 season started much as his 2007 season ended: with another injury. Powell was forced to pull out of the Sydney Grand Prix meeting, having suffered a gash to his left knee that required four stitches.

Asafa Powell was again injured in April, this time with damage to his pectoral muscles. The injury forced Powell out of competition for two months, and was sustained while weight training in Jamaica in mid-April. The injury required surgery and Powell has a visible scar on his right underarm.

On May 31, 2008, fellow Jamaican Usain Bolt ran a time of 9.72 seconds at the Reebok Grand Prix in New York City, and took the 100 m World Record. Powell had held this for nearly three years.

On July 11th Powell suffered his third injury of 2008 while leading in Heat 1 of the Golden Gala Roma. Powell again injured his groin (described as a "strain" and a "cramp"), and the injury forced him to miss the next two events on the Grand Prix schedule.

He made his comeback at the DN Galan, where he beat World Record holder Usain Bolt in a close race, leading home a Jamaican 1-2-3-4 with Nesta Carter and Michael Frater following. This top four would later combine to run the 4 x 100m relay at the Olympics.

Once again Asafa Powell finished a disappointing fifth, and lost out on the medals in the 100 m final of the 2008 Beijing Games, timed as running in 9.95 seconds.

Teammates Bolt and Michael Frater also raced in the final. Bolt won and broke his own World Record (finishing in 9.69 seconds) and Frater came sixth, recording his first sub-10 clocking at 9.97 seconds.

Seven days later, Powell finally got his first Olympic gold as he anchored the Jamaican 4 x 100 m relay team to victory, helping establish a new World Record in the process.

His Split time was recorded at 8.70 seconds (USTAF High Performance Registered Split Analysis), bettering his previous record of 8.84 set in Osaka, 2007. This is the fastest electronically timed anchor run in history.

On September 2nd, 2008, Powell ran a new personal best time in the 100 m of 9.72 seconds (windspeed measured at +0.2m/s). He accomplished this feat at the Athletissima Grand Prix in Lausanne, Switzerland. 2008 was Powells second-best season on the Grand Prix circuit, with 7 wins.

To date, Asafa Powell has ran the 100 m under 10 seconds on 48 occasions,the only man to have bettered this mark is Maurice Greene with 51 runs respectively. Powell has also run under 9.90 seconds 24 times, and is one of only two men to have run legally under 9.80 seconds more than once, having done so seven times.

Usain Bolt is the other, with four sub-9.80 performances to his credit. Powell is the only man to have run legally under 10.00 seconds 15 times in a single season (2008).

Powell has recorded a total of 31 wins in IAAF Grand Prix events, 12 coming in Golden League events and 7 in Super Grand Prix events. He has won the 100 m at the World Athletics Final 4 times.

Like many who preceded him on the world stage, he made us proud-again. From all of us here in Jamaica, thank you Asafa Powell!