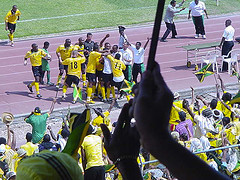 Football in Jamaica is quiet special. Although a cricketer, I have no problems conceding that it is undoubtedly the most popular sport in Jamaica. It transcends all strata of our society.

Rich or poor (or as we say, uptown and downtown),it doesn't matter, everyone enjoys it together. 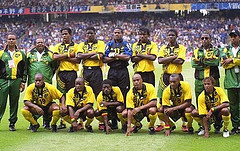 At anytime of the day, particularly on weekends, you can find someone, somewhere, 'juggling' a ball.

Many, including (of course) our politicians reiterated that it is more than a sport here, it is a part of the social fabric. As our 1998 FIFA World Cup qualification proves, it is a strong uniting force in our country. Listen to this!...

You know Jamaica is still challenged by crime is some of our inner cites right? Well on the day Jamaica qualified for the FIFA World Cup, the police department reported that there were relatively no incidents! Such is the power of the sport here!

The Reggae Boys have not qualified again since 1998, but the Reggae Girlz have added two more World Cup qualifications to under Jamaica's belt.

Football was introduced to Jamaica by the British towards the end of the 19th century and it quickly took hold. 1893 was listed as the year we started our first football club!

The Jamaica Football Federation (JFF) is the governing body of football in JA. This was formed in 1910.

They administers the men's and women's national teams and the Jamaica National Premier League. By the way, we nicknamed our national men's team The Reggae Boyz.

The National Premier League, Jamaica's highest football level, is divided into four confederations (as we call them):

Each of these four confederations operates their own Super League and they represent the second level of football in the island.

I can't play football [Please bear with me, I tried], but I must be only one of the few who can't. The truth is however, soccer in Jamaica is not just another sport, it is an integral part of the Jamaican culture.

Pages Related To Football In Jamaica