The history of the Reggae Girlz goes back to the founder and first president Andrea Lewis, who saw the need for a female company in Jamaican football. The Jamaican Women’s Football Association was formed in 1987.

The first qualification for the CONCACAF Women’s Gold Cup came in 2002. The team lost all the games in the preliminaries which evidently, took them out of the running for the 2003 World Cup.

They wouldn’t qualify again until 2006 when they did significantly better than their previous campaign with a fourth-place finish.

In 2010, the decision was made by the Jamaica Football Federation (JFF) to cut funding for the senior team as well as the Olympics program.

These changes made it difficult for the team and they were unable to participate in that year’s qualifiers for the 2011 FIFA Women’s World Cup.

This resulted in Jamaica being excluded from the 2011 world rankings for women’s football due to years of inactivity.

The Return of the Reggae Girlz

The daughter of Bob and Rita Marley, Cedella Marley, took a special interest in the team and became an ambassador for funding the female sports programme. In an effort to rebuild a strong team, it was announced in 2014 that they were searching for female footballers from across the world of Jamaican heritage.

The “Strike Hard for the Reggae Girlz” campaign was also launched that year in hopes of raising USD 50,000 to cover training, housing and other related expenses in preparation for the 2014 CONCACAF Championships and subsequently, the 2015 FIFA Women’s world cup.

It was a slow build for the team as even by 2017, the Jamaican team had not yet regained a spot on the FIFA world rankings for women’s football.

2018, after years of not participating, the Jamaican team entered the first round of Caribbean qualifications. In a remarkable upset, they won their group and advanced to the final round of qualifications.
Jamaica hosted the tournament's final round and entertained locals after winning all four games and securing their spot in the 2018 CONCACAF Women’s Championships.

This was a busy year for the girls as they also competed in the Central American and Caribbean Games. They recorded one win and 2 losses which did not see them advancing to the knockout round.

In the CONCACAF Women’s Championships Jamaica was placed in Group B with Canada, Costa Rica and Cuba. It was a slow start, as they lost to Canada conceding 2 goals to nil, but they played admirably in that game which gave the team and their supporter's hope.

In the second match, they won 1-0 against Costa Rica and 9-0 against the Cuban team in their final game. In the end, they finished second in the table.

In which Year Did Jamaica's female football team qualify for the World Cup? 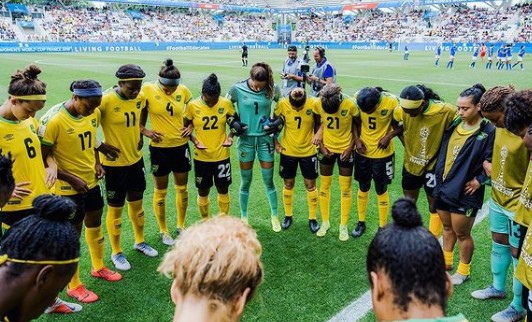 They advanced to the semi-finals where they played the US team and were defeated 6-0. At the end of the games, Jamaica had finished third after beating Panama on penalties.

This secured the Jamaican spot in the upcoming 2019 Women’s World Cup, giving Jamaica the prestigious honour of being the only Caribbean country to have a women’s team at the World Cup and to have both the men and women’s teams participating in the World Cup.

An interesting coincidence, the Reggae Girlz advanced to the games being held in the French Republic similarly to the Reggae Boyz of 1998.

The Jamaican women’s team was placed in Group C alongside Italy, Australia and Brazil but failed to advance. The only goal was scored against Australia by Havana Solaun.

Reggae Girlz would make history yet again and surpass the Reggae Boyz by securing a spot in the 2023 World cup. This is the first Caribbean team of both genders to ever qualify for successive World Cups.

The Reggae Girlz are currently ranked 42nd in the women’s world rankings the highest for any Jamaican team.

References & Sources For The Reggae Sports