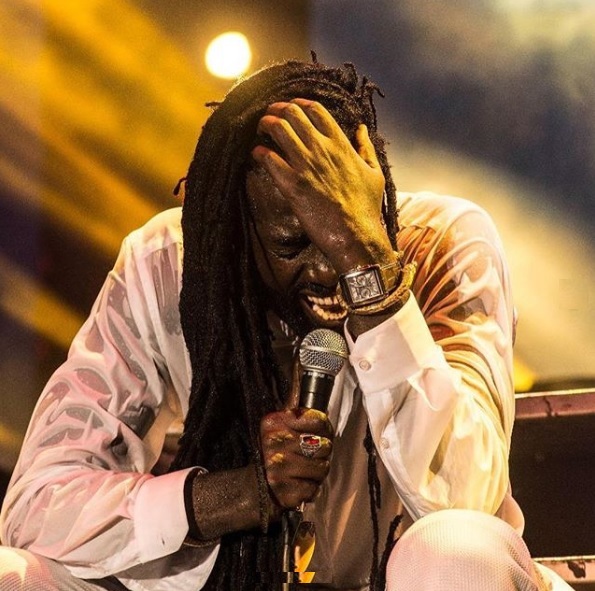 Buju Banton also called the Gargamel, epitomises profound lyrics. Throughout his long career, he has had many albums now regarded as classics and “signatures” of what true Dancehall or Reggae music should sound like.

Yes, He most definitely is. Following his release from incarceration in America, he not only did sold-out dates across the world, Jamaica naturally being its first location, but he also released his well-anticipated album “Upside Down 2020” which earned him a Grammy nomination.

How many albums does Buju Banton have?

Throughout his long career, Buju Banton has released 11 studio albums. These are:

Released in 1992, his debut album Stamina Daddy, now known as “Quick”, was released. His song “The Ruler,” was the lead single. It included songs from even earlier in his career, The Ruler, being one produced when Banton was 15 years of age. This album was released under the Techniques Records label.

This album was also released in 1992 under Penthouse records. “Mr Mention” was the Jamaican term used for a “ladies’ man” at the time. Living up to the phrase, Buju Banton in most of the songs on the 14-track album addressed his admiration for women.

“Love Black Woman,” “Love Me Browning,” and “Woman Nuh Fret” are just three of the many songs on the album uplifting women. The first two mentioned are still among his most successful to date.

On the Voice of Jamaica album, released in 1993 Banton addressed many issues Jamaica was facing at the time stemming from politics, safe sex and crime. The commercially acclaimed album peaked at 159 on the US Hip Hop Charts, 6 on the US Reggae Albums (Billboard) and 5 on the US Heatseekers Albums (Billboard).

The original release had 15 tracks but an additional 2 were made available on the remastered version released in 2002. Both the original and remastered releases were done with Mercury records.

The 1995 release of Til Shiloh signalled the birth of a new Buju Banton, still grieving from the loss of a dear friend and fellow musician, Buju’s belief system changed and this was reflected in his music.

Now a Rastafarian, the music had a more conscious tone than before. Despite what many may have thought Banton’s fanbase only grew.

The album could not have come at a better time, as the artform of Dancehall was thought to be lost as it had gotten very aggressive based on the trajectory of the newer artistes.


The critically acclaimed album has countless hits including, “Shiloh,” “Till I’m Laid Rest,” “Murderer,” "Untold Stories,” "Not an Easy Road," "Wanna Be Loved" and “Champion”.

The album charted well too reaching 148 on the US Billboard Charts, 27 on US Top R&B/Hip Hop Album, 2 on US Top Reggae Album and was certified gold in the United States by the RIAA selling half a million units.

Inna Heights, released in 1997, was not short of hits either and was a very strong follow-up for ‘Til Shiloh. With songs like “Hills and Valleys,” “Destiny,” “Close One Yesterday,” and “Love Sponge” and features with the likes of the Reggae greats Toots Hibberts and Beres Hammond it is no surprise that this is so.

But, of all the great hits on this album, the 28-second intro “Our Father In Zion” is a favourite for Jamaicans for the reverence it shows and with Jamaica being a very religious country, it resonated with the people.

The album is Buju Banton's first number one album; reaching the number 1 spot on the US Reggae Charts and peaking at 34 on the US Heatseekers Albums (Billboard). This album also granted Buju his first Grammy nomination, however, he would lose to Sly and Robbie’s album, “Friends.”

Unchained Spirit peaked at 148 on the US Billboard 200 charts, 2 on the Reggae Charts, 128 Top Album and even reached the Indie Charts, peaking at number 5 and the same on the Heatseekers Chart.

This album featured Beres Hammond, Morgan Heritage, Wayne Wonder, Luciano and Stephen Marley. “Better Must Come” and “Sudan” are just two of the hits on this album.

Although “Friends For Life” was not the favourite release by Banton at that point, he received his second Grammy nomination because of it, although he lost to Sean Paul’s Dutty Rock.

The album peaked at 198 on the Billboard 200 charts, 44 on the Top R&B/Hip-Hop Albums chart, 3 on the US Reggae charts and 14 on the Heatseekers charts.

This album saw the return of Buju Banton to hardcore Dancehall music. The lead single was the titular single “Too Bad,” however, it was the single “Driver” that blew up exponentially.

Following Buju’s previous releases, this was also nominated for the Reggae Album of the year. However, it lost out to “Love Is My Religion,” By Ziggy Marley.

The album peaked at number 6 on the Billboard Reggae charts. It was also Banton’s first release under his own label, Gargamel music.

The ninth studio album release for Banton saw collaborations with Wyclef Jean from the Black Eyed Peas and Third World, the only two features on the 15-track album. The Grammy-nominated album has songs such as “I Rise,” “Rastafari,” "Affairs Of The Heart," "Lend a Hand," "Optimistic Soul," and "Make You Mine."

This album reached number 2 on the Billboard Reggae charts and 26 on the Heatseekers Chart.

It was Buju’s 10th album and 5 Grammy nominations where he won for Reggae album of the year. This album features songs such as "Battered & Bruised,” "Bondage," "Struggle Together" and “Innocent”.

This album reached number 2 on the Billboard Reggae charts and 26 on the Heatseekers Chart.

Unfortunately, he was unable to celebrate his win on the Grammy stage as he was indicted in the USA on drug charges. This would be the last of the consistent releases of Buju Banton albums for 10 years as he served his sentence in the United States.

Buju Banton was released on December 7th, 2018 to scores of Jamaicans awaiting him at the Norman Manley International airport in Kingston.

His long-awaited tour aptly named, “Long Walk To Freedom” began in 2019, kicking off at the Stadium in Kingston. This was followed up by his first release in 10 years in the middle of the pandemic called “Upside Down 2020”.

The 20-track album began with the song “Lamb of God” one of the many hits on the album. The others include “Buried Alive,” “The World is Changing,” and “400 Year.”

In true Banton fashion, it was yet another Grammy-nominated album.

How many songs does Buju Banton have?

With 11 studio album releases, singles and features it will be rather difficult to tell how many songs the artiste, Buju Banton has. Suffice it to say it is quite a lot.

What is Buju Banton's biggest song?

Buju is no stranger to hit songs and number 1 records. He even beat the record of the legendary Bob Marley for having the most number-one hits.

I think his biggest song is debatable, but if you were to make a Buju Banton Playlist these songs would definitely have to make the list.

So are you more of a “Driver” or “Destiny” listener? Whichever it is, there is no denying Mark “Buju Banton” Myrie's ability to tell a story creatively and entertainingly.