The Story of
The Jamaica Gleaner Newspaper 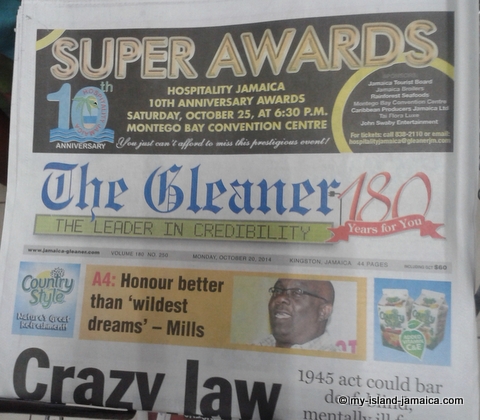 We've come to know it as the most trusted source in the print media in Jamaica, but what do you know of its history? Who's idea was this? When was it started? And what is its current reach?

Read on to learn about the rich heritage of Jamaica's most respected newspaper.

The History Of The Jamaica Gleaner Newspaper

Established in 1834 by the DeCordova brothers (Joshua and Jacob), the Jamaica Gleaner Newspaper is now the oldest operating newspaper in the Caribbean!

It was actually launched on 13 September 1834 as The Gleaner and Weekly Compendium of News.

It started at a crucial moment in the island's history; a time when the era of slavery was coming to an end.

Interestingly, the paper actually grew from an advertising sheet the deCordova brothers used to publicize goods for sale called the DeCordova's Advertising Sheet.

Jacob deCordova, the younger brother, has, however, greater claim to fame outside of Jamaica and is closely identified with the history of the state of Texas, USA.

He was born in Spanish Town, St. Catherine in 1808 of a Jewish family that had settled in Jamaica for many generations, but was taken by his parents to the United States at an early age.

He became a major real estate dealer, publisher and promoter in Texas and represented Harris County in the state legislature. He also laid out the town of Waco, Texas, drew the first map of the state, and introduced the lodge, the Independent Order of Odd Fellows, to the state.

It was while of visit to Jamaica in 1834 that he founded the Gleaner!

The deCordova family continued to maintain an interest in the publication for several generations.

The first issue included a mission statement of sorts with the editors promising to "please, amuse and to inform while holding domestic life sacred no attacks on private lives would be made."

Three months later the paper's name changed to The Gleaner: A Weekly Family Newspaper devoted to Literature, Morality, the Arts and Sciences and Amusements.

Two years later the paper expanded to 4 pages and was being published daily except for Sundays. Advertisement sheets were distributed for free and subscribers could get the paper by 6 a.m.

Other Early Publications By The Gleaner

Although the paper became a public company in 1897, Michael deCordova served as managing director until 1948.

By that time the Daily Gleaner was involved in charitable causes, and in book publishing, having started to print the "Gleaner Geography and History of Jamaica" in the 1920s for use in schools island wide.

The Children's Own started publication in 1950 and the Overseas Weekly Gleaner began in 1951 as did The Star.

Today, Jamaica boasts multiple newspapers alongside the Gleaner. These include magazines and journals The Star, Observer, and Herald, and various media and publishing houses and imprints, and numerous book and stationery stores.

The Gleaner's operations by the way are now fully computerized, and it remains the island's foremost newspaper group, employing close to 500 people in Jamaica, with offices across the world, including Kingston, Montego Bay, America, Canada and the United Kingdom.

The overseas weekly editions are published in the United States, Canada, and Britain.

The Daily Gleaner was mentioned by Dr. No's photographer in the 1962 James Bond film Dr No.

In addition, the company partners with many other media houses to support Crime Stop, the Allman Town Redevelopment, PALS (Peace and Love in Schools), the United Way of Jamaica and the Century Club, UWI.

Old (and very old) editions of The Gleaner are made available courtesy of NewspaperArchive.com and is available at Gleaner Digital Archive.

To learn more or get the latest, visit the Jamaica Gleaner's website.

And if you haven't done so, make sure you subscribe to my free monthly e-zine My Island Jamaica Digest (MIJD) and stay with the latest from Jamaica!

Back to Top The Jamaica Gleaner Newspaper