I have inherited some coins from a relative and this one has caught my eye is a Jamaican one penny dated 1370 and I would like to know more about it.

The coin has picture of a monarch on one side and a coat of arms.

Anyone know anything about the history or currency of the period?

I doubted if the date on the coin was really 1370 and so I did some research and actually found that it might not be, but rather, the year 1870.

The monarch that you saw on one side is actually Queen Victoria of the British monarch and the coat of arms, as you stated, is on the other side.

In 1370, Jamaica was not yet 'discovered' by the Europeans. It was only in the year 1494 that Christopher Columbus, the Spanish voyager, came here.

Before that, it was mainly bartering between the tainos who were here.

Be sure to read more about the history of Jamaica here.

The first units of exchange used by the Spaniards (who came with Columbus in 1494) in their dealings with the Tainos, were items such as glass beads and trinkets, scissors and mirrors. They later used copper maravedis.

When the British captured Jamaica from the Spanish in 1670, Spanish coins continued to circulate but in 1822, they started using British coins.

Jamaican coins though, were not officially created until 1869
when denominations of penny (1d) and half-penny (1/2d) were issued.

That coin then was apparently issued the year after (1870).

Thanks to worthpoint, I managed to get a picture of one of them (see below, showing both head and tail) 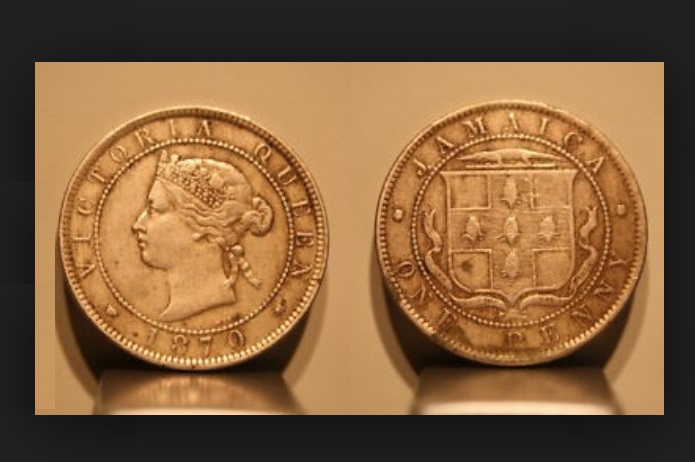 I hope this was helpful.

Be sure to read more about the Jamaican currency here.