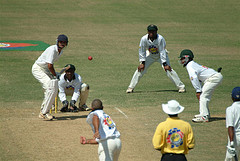 Cricket is my game, so you bet, I had to dedicate a page to Jamaican cricket. I play cricket most weekends, on or off season-it doesn't matter and my team, Granville Cricket Club, out of Montego Bay, tours the entire island. Yep!

Cricket in Jamaica, and by extension, the Caribbean (West Indies) is fanatical.

The excitement gets fever pitch, especially with the thumping reggae music in the background, and the chanting of slangs from every corner of the stadium or park.

As a matter of fact it's one of those sports that many played as a child growing up here in Jamaica, especially the boys. You would frequently see them after school with their make-shift bats and stuffed juice boxes for balls as their fellow school mates stand on the sidelines cheering them on.

What is Jamaica cricket sport?

Why am I here assuming that you even know what cricket is? My love for the sport sometimes have me thinking that everyone loves it too. You see, cricket is sometimes confused with baseball, it is not the same, maybe a bit similar though. Cricket is played with a bat and ball between two competing teams. Each team has 11 players that consist of batters, bowlers and wicket keepers.

The aim of the game is for the batters to score runs, a run occurs whenever a batter (referred to as batsman) strikes a ball and runs from one crease line on the field to the other. The fielders duty is to try and stop the ball. At the end of a game, the team with the most runs win.

Who brought cricket to Jamaica?

As with many other things cricket was brought her by the British, it goes way back to 1895, when Jamaica played three matches against a touring side from England led by Slade Lucas, but because of the distance to the other cricketing countries, Jamaica did not play regular first-class cricket until 1964.

We played in the inaugural Shell Shield first-class competition in the Caribbean, winning it on the fourth attempt, but then had to wait until 1977-78 for our next title - which was a shared one-day title with Leeward Islands.

Jamaica has always been one of the regional teams to reckon though, as we have always produced talented and excellent cricketers but was not always able to live up to the high expectation many times as a team.

Our main cricketing venue is Sabina Park but there are several smaller venues around the island, including:

By the way the Trelawny Multipurpose Sports Club was home of the opening ceremony of the 2007 Cricket World Cup in the Caribbean.

I went to one of the warm up matches there, here are some of the pictures. 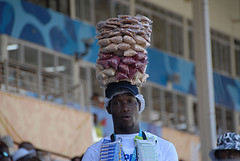 "Nutsy" at a cricket match

Who are the famous cricket players in Jamaica?

Headley though, a star from the 1930s, is argued to be our most famous cricketer. One of my favourites though was Ricardo Powell (Pow Pow), who played for us and then moved to Trinidad [He found his love there :-) ], however he did not deliver the goods at all.

Although not a Jamaican, Brian Lara, world record holder, is my cricketing idol. [I had to add this note]

Currently, cricket competes strongly with the other local sports for the quality players here in Jamaica, but we have a very strong under-15 competition running now, and we have already seen a few quality youth cricketers emerging from it.

And if we mention the players, I think we must also mention now retired cricket umpire, Steve Bucknor OJ, who is also Jamaican.

The future of Jamaican cricket is not looking too bad after all.