Jamaican Weed
Legal Or Not? Here's The Truth 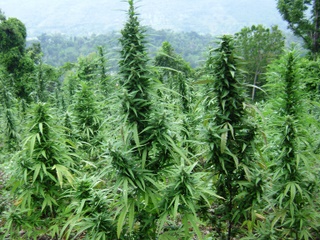 Updated! On April 15, 2015, The Ganja amendment law came into effect. Basically, after this day persons found with two ounces or less of marijuana will no longer be subject to arrest or detention by the police.

They will be issued instead with a ticket for $500 payable within a 30-day period at a revenue centre. Read more here

They brought it to the island when they came here to work on the plantations. It was however made illegal after a while.

It is popularly used by many of the people of our island (although still the minority), especially the Rastafarians.

Rastafarians believes it gives them a sense of calm or in Jamaican terms help them to 'hold a meditation'. Before it was used by Rastafarians however, it was known to be used for medicinal purposes.

Today, in addition to it's use for smoking, this substance is also used for the making of tea and cakes. Weed is also used in the spiritual ritual for a group of Rastafarians popularly known as Nyahbinghi.

At this event they normally make a chalice which is a large smoking pipe stuffed with Marijuana (Weed) and passes it around as they 'reason' among each other.

The Weed is however is still deemed as an illegal substance, so although it is important to some, the law requires it to be seized then destroyed. There is also a sentencing period that is imposed if persons are caught with possession of this plant.

Some health officials have named it as an addictive substance, labeling it as a destructive drug that can harm the mental and physiological development of the body.

Most Jamaicans don’t agree with the law surrounding it and often try to export it to other countries that have a higher value on it. Of course, due to the fact that we are a tropical climate zone, the suited weather to grow it in abundance, we have become a prime producer.

By the way, researches have shown that the Jamaican Weed is the most readily available illegal substance found in New Jersey, USA. The value of weed in New Jersey depends on the location and quantity sold.

So what about it's role in crime?

Well, there is very little violence associated with it. Generally, Jamaican users are generally characterized as non-violent. The effects of the drug often depend on the user and amount used- like everything else in life!

It is said that low doses of this substance normally produces relaxation while high doses might cause hallucination, a loss of personal identity and creates fantasies.

The cultivation process can lead to violence. The truth is, farmers of the Weed do their farming on the outdoors, and in order to protect there produce they normally have to install their own security measures which are normally very illegal and violent acts.

According to reports, Jamaican distributors sometimes turned to violence in order to protect there markets and intimidate witnesses.

So that said, do you think Ganja should be fully legal in Jamaica? Click Here to share your views,
OR
Click Here to see what others have said

Please make sure you subscribe to my free monthly e-zine My Island Jamaica Digest (MIJD) and stay with the latest from Jamaica!

Back to Top of Jamaican Weed