See Also: What is High School Life Like in Jamaica? 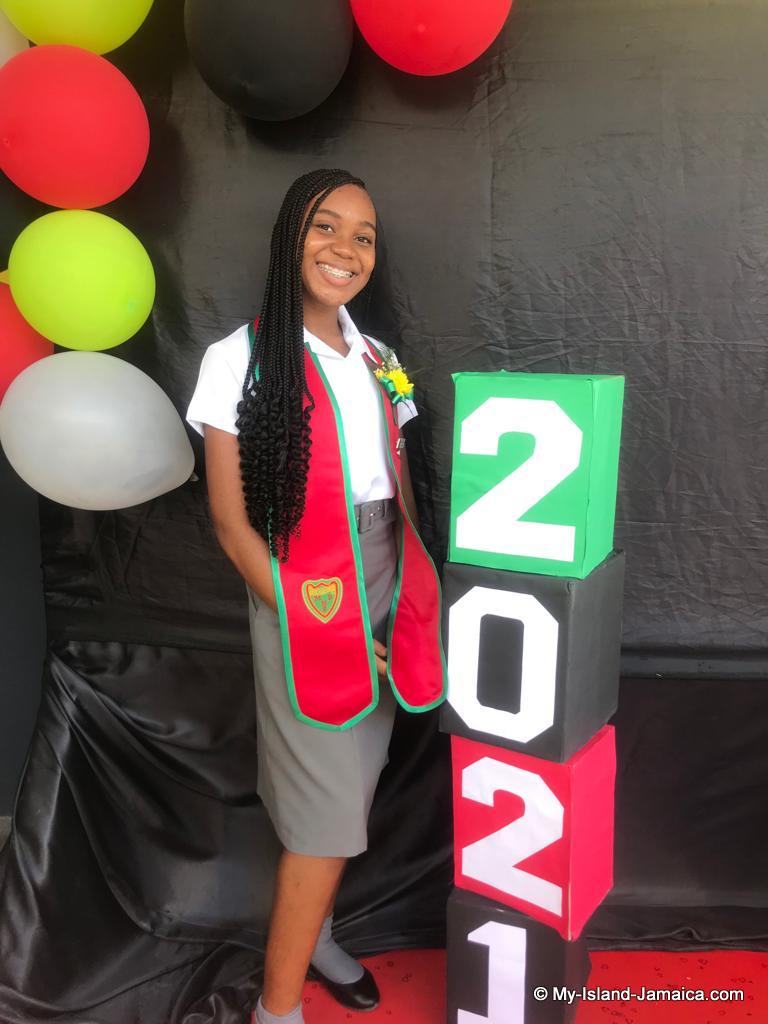 Photo:Karena Gayle at her Graduation Photoshoot

Imagine crowning your high school successes with 100% passes with distinctions (grade 1) in your exit examinations!

That is something out of a dream right?

For Karena Gayle, it is a reality! That, in fact, summarizes Karena's achievements in the 2021 CSEC Examinations, who ended her high school career with 12 grade ones, three of which were done the year before.

I'm sure you would want to know more about this outstanding individual. I caught up with her recently and today I am sharing what I discovered with you.

Life at Montego Bay High School for Girls
Karena Gayle attended Montego High School in St. James for 5 years. She describes the all-girl institution as a great place for young ladies as it boasts a hospitable family-like atmosphere among the students in spite of its structured (strict) approach.

Evidence of the strictness includes teachers checking the appropriateness of fingernails, hair accessories and sweaters. However, she says the teachers knew when to dispense with strictness.

On these occasions, the activities done for fun included heroes day concerts which were held one afternoon during heritage week. She believes the school helps to build young ladies and direct them onto the right paths and that she has definitely benefited from being a part of the Montego Bay High School experience.

Choices
One of the things I asked Karena was when did she eventually tied down the subjects she would be doing at CSEC. Sounding as confident as she did throughout the interview, she stated that she knew from about 9th grade when students were normally called upon to select the subjects they wished to pursue for the CSEC programme.

Her strategy was to choose the ones which were compulsory for her career path (which she had already decided on) and then select some subjects that she liked. Therefore she selected the sciences, specifically physics, chemistry and biology, mathematics and English with the school’s mandatory choices of Spanish and English literature and her personal selections, religious education and physical education, rounding out the subjects. She also had an interest in business though and so she pursued Accounts, POB and Social Studies at extra classes.

Structure and Sacrifice
I asked the Montego Bay High School standout, "How does one manage his or her schedule to prepare for sitting 9 subjects in one go, have personal time and live a normal teenage girl life?"

She matter of factly explained that in preparing for the CSEC examinations for her 9 subjects the first thing she did was complete her School Based Assessments (SBAs) early into the second term of her final year. She describes herself as an “outgoing person who doesn't go out much” and as such did not have to focus on some of the things other teens were caught up in.

She zoomed in on school during school time and saved fun things for holiday periods. She credits her dad for this ability as she stresses that this is how she was raised.

She had to do something educational like reading a book, before doing something fun such as watching cartoons. So here we see the benefit of structure in creating high achieving individuals. The fact that her school had the type of structure which she was already familiar with from home further enabled her academic growth.

She described her peers as, “The most beneficial part of the ecosystem” at Montego Bay High School. This assessment is mainly due to the students being highly competitive, while simultaneously being supportive, sharing and offering peer support when needed.

She too is someone who contributed to the “sisterhood and friendship” as she was there when her school family needed her. According to Karena, Montego Bay High School gives a “feeling like home”, it is “comfortable” and a great mix of being competitive and supportive.

COVID Reset
COVID19 was classified as a wake up call, at least for Karena who then realized that she “knew absolutely nothing.” Unfortunately, when schools had to shift gears to online platforms due to COVID19, there were struggles to complete the syllabus accompanying each subject.

This meant cramming and reduced time to study and practice. Having been equipped with the fundamental resources, Karena describes online schooling as a positive for her with the only drawback being the absence of her friends.

It caused her to exhibit more discipline as she quickly recognized what the unpleasant results would be if she procrastinated at home. She resorted to her usual structured and disciplined approach and woke up earlier, dressed the part and participated well. Effectively, Karena’s official study window was the three weeks before exams. This demanded greater focus, motivation, commitment and family support. She developed a strategy where she would rest after classes were completed for the day and then wake up to study until about 3 am. At times she would even “pull all-nighters''.

The Results
The CSEC results validated her sacrifices. In total, she did nine subjects in this sitting. The results were 9 grade ones with 8 straight A profiles!

She views her performance as being good and she is grateful for the outcome but she really believed she could have done even better in her physics, perhaps the perfect score, because she “overlooked an important part of the exam”.

In acknowledging her family support, Karena says she couldn't have done it without them. At moments when she felt defeated and like giving up, her family was there. Her mom and dad would motivate, encourage, seek assistance and even try to help even though some of the subjects were unfamiliar to them. The siblings would cheer her up and her extended family also pitched in whenever their support was needed.

The Future
Karena has set her sights on becoming an orthodontist. Her inspiration comes from her having to be fitted with braces as she saw firsthand what the device did for her confidence level, and so she wishes to assist someone in that respect.

In the next three years, she envisions herself approaching her final year in training for dentistry. Her future self is a very professional and respected orthodontist who makes herself and her parents, siblings and family proud. She also wants to help her dad operate the family business while she entertains the idea of operating a business of her own.

Nuggets to Note
By way of advice to others, Karena suggests pacing, starting early, having self-belief and studying from the syllabus and not the whole textbook. “Believe in yourself, work towards it, be diligent, and be patient.” However, she says not to beat yourself up if you make a mistake or are not successful as we all have challenges.

She encourages parents to be gentle, kind and understanding as this can be really beneficial for a child. Parents are also encouraged to lend a hand where possible. Three words that describe Karena Gayle in her own words are “goal-driven, persistent and confident”.

Karena's achievement was recently featured on the Jamaica Information Service’s (JIS) website and above that, their photo of the day!

AND, when we thought it was over, they also featured her on The Voice Of Jamaica (JIS's Radio Program) that played on all local radio stations as well! Here's the link to that audio recording: https://jis.gov.jm/radio_programs/csec-achiever-karena-gayle (Look for the ▶ button and press it)

WATCH VIDEO! We did a full video interview with Karena and family - now live on YouTube! Here's it! Enjoy.

We are all very proud of her achievements and can’t wait to see what she will accomplish next! As usual, we welcome your comments here.

Editor's Note: You guessed right? Karena Gayle (@renadestinyy) is the daughter of Wellesley Gayle (@myislandjamaica), founder of this website (my-island-jamaica.com).

Wellesley's response to Karena's achievement was, 'To God Be The Glory!'. He shares several experiences of the family here on the website.

P.S. I recommend you read, Jamaican High School Exams - Is CXC accepted in England?.
Back To The Top Of This Page