Living In Jamaica
An American Share Her Real Life Experiences 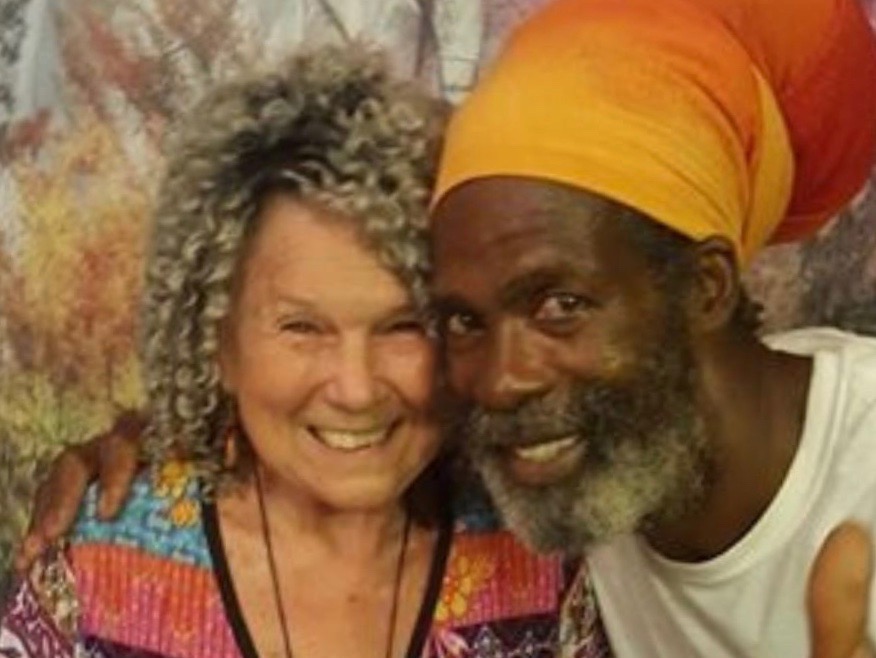 Cherri Avery Black with her Rastafarian Husband Living In Jamaica

Today we have a very interesting story to share.

This one is actually the first from our new “Spotlight Feature” where we interview interesting Jamaicans (local and overseas) and Jamaican enthusiasts, yes persons like you!

By the way, you also have the opportunity to make recommendations of anyone you believe deserve to be highlighted.

So without much adieu, here is the story of Mrs. Cheri Avery Black, a white American woman, married to a Jamaican and living in Jamaica, as is interviewed by Wellesley.

Who Is Cheri Avery Black?

Cheri is an American woman, born in Kansas and spent her childhood years there on a farm. She later moved to Philadelphia where she spent most of her adult years.

This is no simple lady, but yet so humble.

So what does all this have to do with Jamaica, you may ask?

Cheri mentioned that when she was 33 years old, she got a divorce.  It was a difficult time for her and at some point she was talking to some friends about what they wanted to do when they retired.

In a moment of surprise, surprising even her own self, she blurted out that she wanted to have a guest home in Jamaica. Mark you, she had never been to Jamaica or know anything about Jamaica, only that it was somewhere in the Caribbean.

But she just tucked that to the back of her mind.
Little did she know she was speaking her destiny into being.

After that, it was as if life started preparing her for what was to come.  She started to have more black and African-American friends over the next 14 years and through interaction and information sharing, was no longer ignorant about a lot of things including culture but now educated.

She considered this her very own or personal PhD in black history. At this point she was again at the stage where she felt ready to remarry and she made a list of what she wanted in a husband, narrowing it down to three things: one who totally adores her, spiritually grounded, and loves housekeeping (as she was not domestic-oriented).

Six months later she had met a new friend who was headed back to Jamaica. Her friend was writing her doctorate dissertation about bartering or how to live without money. She had discovered that Jamaicans were very good at that and wanted to visit for interviews.

As fate would have it, Cheri travelled to Jamaica with her friend.  Shortly after arriving, they visited a beach and her mind was telling her to go to the country side.

The following day, her friend took her to a little village in the hills called Lottery. There she met a young man who engaged her in conversation and within 15 minutes they were calling each other husband and wife. He was a Rastafarian who had just started his knots. It was love at first sight. Can you imagine!  She had met the man of her dreams!

Cheri’s first visit to Jamaica was November 9, 1994.
And yes, there were many challenges and obstacles.

He didn’t want to go to the U.S. at first, she had her job there.  Communication was a real challenge as there no readily available phones.

At lot of times there was absolutely no contact.  It reached the point where she was considering a break up of the relationship. Eventually she convinced him to get a visa and before long, he and his two young sons had moved to Philadelphia with her.

The dream of having a guest house in Jamaica was still very much alive – the very reason why she came to Jamaica, and after about 10 years of marriage they were able to find a partially built guest house in Mt. Salem, Montego Bay for a very good price.

Needless to say, the rest is history.

Of course, there was a lot of travelling back and forth as you can imagine. During this time, she immersed herself in the Jamaican culture.

In January 2016, they returned to live in Jamaica. In 2017 they opened the guest house (The Topaz Dream Palace) on airbnb and since that, they have hosted over 500 guests.

Cheri was not spared health challenges.  In 2013,  she was diagnosed with stage 4 cancer but with the support of her husband and friends who ensured that she maintained a particular diet, especially with the Rastafarian way of life, somehow the cancer disappeared after about 3 months! Another amazing story!

At this time I must make mention of her book.  Certainly, you can see that there is so much to tell, it had to be put in a book.

The name of her book is “Loving To Be We”.

You can find it on Amazon and other book-selling websites but also on her website: https://cheriaveryblack.com/

Cheri continued to speak of her experiences including the difference between racism in Jamaica and the U.S.A.  and also the differences between the American and Jamaican culture.

She also spoke of their small farm where her husband  Jah B, enjoys growing organic fruits, vegetables, and herbs making it easier to live in Jamaica despite the many financial challenges that many Jamaicans have.

She was asked “what makes Jamaica special” and her response was “the people- the rhythm of the people” and how friendly they were.

I’m sure by now you want to go and watch this intriguing video so I won’t take much more of your time.

Here is the link below for the full interview video.

Back To Top of living in Jamaica

Watch Video! Living In Jamaica as an American

References To Living In Jamaica

Back To Top of living in Jamaica

Other Pages Related To Living In Jamaica