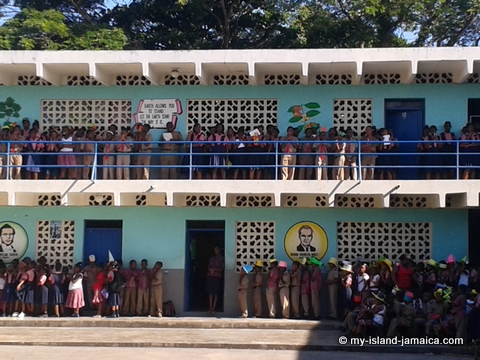 There are several things pointing to the fact that Jamaica is founded on the principles of Christianity. This fact is evidenced in many national symbols. For example, “Eternal Father bless our land” is the first line of the Jamaican National Anthem while The National Pledge for School commences with the line “Before God and all mankind...”. The first two lines of the second stanza of the National Song for Schools says:

“I pledge my heart, this island
As God and faith shall live”

We also weave Christian practices into everyday school life as naturally as we put spices in our meals. But, do we leave “Out of Many One People” out of our religious practices in schools? At what level do we begin to teach religious principles in schools? Are students forced to conform to Christianity? Much more will be revealed in today's look at religion in Jamaican schools.

Church Schools are a common feature in Jamaica. Older established churches have founded basic schools (kindergarten), from this level a child could transition to the primary school affiliated with the particular church (sometimes the school is even named after the church), then on to a high school (secondary). Later on, it is possible to move on to a tertiary institution connected to that same church. For instance the Moravians have been involved in education since 1754, Baptists, Catholics and Anglicans have had this system for a long time as well. The Seventh Day Adventist Church has established the oldest private tertiary institution in Jamaica in the 114yr old Northern Caribbean University. More recent churches have established at least a private kindergarten school and some have preparatory schools which run up to grade 6 level.

Christianity is so entrenched in our culture that even private schools which do not have an alignment to any religious entity conduct devotions daily and have religious practices such as a prayer before lunch daily and annual Christmas Carol Service. Even now, through this period of online school due to the ongoing pandemic, the practice of devotion in the mornings is still maintained. Once your institution is affiliated with a church, the pastor visits regularly and the institution is integrated into church based activities. As such special school activities may be launched at the church and an invocation service led by the church is done at the start of each school year. Devotions are held daily right across the educational system and are compulsory at the primary and secondary levels. Grace(short prayer expressing gratitude) is said before each meal in kindergarten and primary schools, a thanksgiving prayer is said after the lunch hour and a closing prayer at the end of the school day. No matter the occasion it begins with a prayer whether it is a staff meeting or a civic ceremony such as Heritage Concert. In some schools’ the pastor of the affiliated school chairs the school’s board and helps to direct the affairs of the schools. In some cases, the teachers and staff are proponents of the practices of that particular religious group.

But how do minorities fare in this setting? Non-Christians are accommodated very well in the Jamaican school system. They are not forced to participate in the activities, particularly those which go against their religious practices. In more recent times the Ministry of Education, through its policies and code of conduct, has been deliberate in stating that personal grooming habits should not be used to keep students out of school. Of course, there have been hitches because of the deeply entrenched Christian based value system which some still cling to. However, I have attended primary and high school with individuals who were practising Rastafarians. My own children have Muslim, atheist, and Hindu peers and as one moves up the educational ladder, you integrate with various religious groups quite smoothly. They are catered for even in the meal plans at the schools for instance if you are vegan you are not offered meat options.

The shift has come at a welcomed time and has not happened overnight. I say this because people about 60 years and older did basic Bible study as their religious education classes looked at things such as the Voyages of Paul. Those in their 30’s-40s like myself, learned general Christianity and my children (late teens to early 20s) learned the major religions of Jamaica; Christianity, Hinduism, Islam, Judaism and Rastafarianism. Education on these religions begin at Grade four and last through to Grade 9 of secondary school as a compulsory subject before it is offered as an elective for the external exams, CXC. These religions outside of Christianity never featured until grades 7 - 9 of high school for me. In summary, religious education is compulsory from grades 4 - 9. How is religious education taught before grade 4? Good question. The stories in the Bible are integrated into the curriculum. For example, the stories in the Bible are used to teach topics such as creation or basic needs can be taught using the story of Jesus feeding the 5000.

Jamaica is a Christian society, and even though the percentage of devout Christians has fallen from a high of 98% to more recently 60%. We still have Christian practices which are featured in our education system. However, the system considers the rights of all groups to practice their religious beliefs without being coerced into a particular belief system. So we are still staying true to being “Out of Many One People.”

I also recommend you read, Major Jamaica Religions Who Are They?.

Editor's Note
We welcome your comments and feedback here Don't hestitate to share!