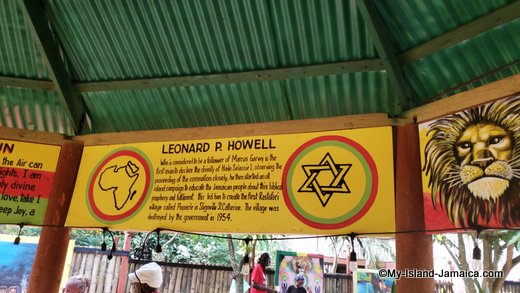 Rastafarianism is the religion created in Jamaica. Rastafarianism is synonymous with being one with nature, having a healthy lifestyle, going against the grain and voicing one's opinions on the social and economic oppression of people of African descent. Rastafarianism was made even more known worldwide through Reggae music and legends of the genre like Bob Marley but who was the First Rasta? Today we will be looking at Leonard Percival Howell.

When Was He Born?
On June 16th, 1898 in the community of Red Hills, Clarendon, Charles Theophilus Howell and Clementina Bennett welcomed their son Leonard Percival Howell into the world, the first of 11 children. Not much is known about his life as a child, however, we do know his parents were independent black farmers and business owners. His father was a major stakeholder in the Jamaica banana export industry. Leonard witnessed a murder when he was just 13 years old and upon refusing to testify, his father had to make arrangements to get him out of the country and to safety as he had enraged a lot of people by his decision. He left Jamaica for America on a banana boat in 1912, met Marcus Garvey and joined the UNIA. For twenty years he built a life in America, even having a shop on the legendary 135th Street in Harlem, New York where the UNIA and its stakeholders had many businesses. Howell travelled frequently to other parts of the Americas but this all came to a halt when he was arrested and deported to Jamaica in 1932.

Life Back On The Island
Howell returned to Jamaica and reunited with Marcus Garvey, eventually starting his own sect where he rallied with the disenfranchised people and tried to educate them on a new way of life. Howell found it hard to grasp that the god of the oppressors would be the same god of the poor blacks. He implored them to stop worshipping the ‘white man’s god’ and stop paying taxes to benefit the colonial regime.

He began following the work of Ras Tafari Emperor Haile Selassie I of Ethiopia and soon considered him the black Messiah. It wasn't long after this that he began going across the island preaching his new beliefs in hopes that his fellow black countrymen would believe as well as he urged them to worship him as their god and king.

One major key to his preaching was the 1930 crowning of Emperor Selassie. There were many influential persons and world leaders in attendance including the sons of King George V. The most important part of the ceremonies, for Howell at least, was the sons of King George V rendering the new Emperor with gifts and bowing to him as well. On the accounts of his son Monty Howell, Leonard claimed that the Lion of Judah had now broken the chains and the black race was now finally free as King George had sent his sons to bow before our new king, King Ras Tafari. He preached on the divinity of The Emperor as a god in his human form, a practice which was prevalent in ancient spiritual practices of Africa and the Eastern world. To this day the reincarnation of Haile Selassie as god in the flesh is a pillar of Rastafarian philosophy. This was the fuel Howell needed as more people started to believe in Haile Selassie as a god reincarnated. These statements however got Howell arrested.

Time In Prison
Howell paid the price for his statements and was tried and prosecuted in March of 1934. Even worse for Howell, he was tried by the same prosecutor whose case he had derailed by not testifying all those years prior. He was sentenced to two years in prison, but he had by this time amassed a cult following in Jamaica. After he was released two years later, he purchased properties in East Kingston before finally relocating to a 500-acre property in Sligoville, St. Catherine that he christened Pinnacle. His followers relocated to the area as well and thus the first Rastafarian community was formed. Pinnacle was special not only because it was the first Rastafarian village but also because it was one of the first self-sustaining communities on the island. Their economy thrived on the cultivation of Marijuana and other ground provisions as well as the rearing of livestock. If there was a surplus it would be sold to outsiders making a high percentage of Pinnacle's residents able to take care of the needs of themselves and their families without outside help.

The attack on Pinacle
The then government was not happy about Howell and his followers. Drawing the years of 1941 to 1954 Pinnacle residents were attacked and had their homes raided and belongings stolen by the authorities countless times. A big part of this was due to the cultivation of marijuana which is an illegal drug, which Howell did not agree with marijuana being classified in this way. Rastafarians also went against the preconceived social order and as such, they were classed and vagabonds and disruptors to society. Howell was sent to prison or to the Bellevue Mental Asylum countless times during those years.

Howell’s son recalls being present for and even at times being arrested during the raids. One vivid memory for him was in his teenage years when he and his brother were arrested and brought to the Spanish Town Police Station. The police had come in search of their father but he was not around, instead they decided to arrest the boys on false claims. The matter included watches, given to the boys by their father as a gift. When asked to present a receipt for the items as proof of purchase a young Monty told the officers they didn’t have receipts as it was a gift from their dad. Still, they were arrested where Howell was demanded to pay copious amounts of money to see his children free. In May of 1954 Pinnacle was raided for the last time, this time to the point of no return. Countless Rastafarians were arrested or left homeless as their houses were deliberately set ablaze.

The Principles of the First Rastas
Howell was a radical leader and as such the principles were sometimes harsh and frowned upon forging wholesome relationships between black and white people. His goal, however, was to return to the continent of Africa and for people to accept Haile Sellassie as their supreme being and the only ruler of the black race.

Howell and the influence of Hinduism on Rastafarianism
Howell had many associates who also preached, for example, Joseph Hibbert. Joseph Hibbert was quite influential in understanding and explaining the philosophies of first day Rastafarianism. He also had a concern with worshipping a white god and sought answers to the question of whether or not it was right. Based on what he saw, each culture (by then Indians and Chinese had entered the melting pot) had its own god and therefore this further strengthened his views.

He had a friend from India who sometimes acted as his security guard. This friend is said to have given him the name Ganggungguru Maragh, sometimes shortened to G.G. Maragh. The name derived from Hindi words meant; gyan (knowledge), guna (virtues), guru (teacher), and maharadj (king of kings). This was the pseudonym under which he released his book The Promised Key while in prison. The book outlined the coronation of Haile Selassie and relied heavily on the philosophy of Reverend Fitz Balentine Petersburgh of Ethiopia. Gagunguru Maragh was often shortened to Gong Maragh, Tough Gong or just Gong which is why legendary entertainer Bob Marley’s nickname was Tuff Gong. Howell continued to use this name until the 1960s. The practices of eating healthy and the use of Marijuana as a part of their religious rituals were borrowed from the Sadhus (Indian holy men). Marijuana is also called by two other names, Ganja and Kali, it is believed that the name was given in honour of the Hindu goddesses Ganja and Kali.

When Did Howell Die?
After the horrific events at his home in 1954, Howell relocated to Tredegar Park. But even then he was still not able to live a quiet and peaceful life. In 1980, when he was 81 years old, he was violently attacked by a mob who did not agree with his Afrocentric views. He was beaten and even stabbed by the people and was rescued when neighbours heard his cry for help. He left Tredegar Park and lived at the Sheraton Hotel until he passed on a year later from a heart attack. Monty does not believe his father ever recovered from the harrowing events and thinks it played a major role in his death.
Whether or not you choose to believe in the ideology preached by Howell, one thing is certain: he articulated as well as lived what he believed.


Editor's Note
Submit your questions here! With well over 2000 questions already answered, chances are we can assist :-)