What are the uses of bauxite in Jamaica? 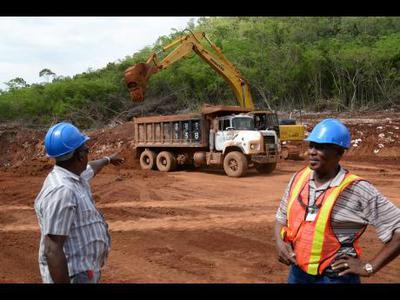 Why do we mine bauxite in Jamaica? How did it even start? What's the intented use? And what's the benefit to Jamaica? I'll attempt to answer these questions for you now.

In Jamaica, when we make mention of natural resources, bauxite is the first thing that usually comes to mind. Travelling between Montego Bay and Kingston, I always take time to observe the buzzing operations taking place at the bauxite mining plants. This mineral ore can be found in large deposits on the island, mainly the central and northern region.

Now, a lot has been said about the bauxite industry. Some praise it as a significant contributor to the economic sustainability of the country, while others are quick to pinpoint the negative environmental effects of the activity.

Whether you are for or against, both you and I can admit that bauxite and the bauxite mining industry has played an important part in Jamaica’s economic development.

A trip back in time will reveal the timeline and evolution of the bauxite industry.

The need for bauxite rapidly increased as a result of World War II.

Well, bauxite is actually the main component in aluminium production, which was apparently very important for fabricating military aircraft.

This sudden boom in demand for the mineral ensued a goal of locating other sources of bauxite outside Europe and the United States of America.

The exploration work conducted by three North American companies led to the discovery of the large quantity of bauxite deposits in Jamaica.

Although Jamaican bauxite was never used in World War II, the war sparked a ripple effect which gave birth to the bauxite industry.

Jamaica’s first shipment of bauxite occurred in 1952 and subsequently, in 1957 the island was known as the world’s leading bauxite producer!

The Uses of Bauxite in Jamaica

Now, given that bit of the history of the bauxite industry will give you an appreciation of the main purpose of bauxite in Jamaica.

This main purpose that I speak of is exportation. Yes, the main purpose of mining the bauxite from the earth is to export it to foreign countries where it will be converted to aluminium.

Aluminium is used in a number of things that we come across and use on a daily basis, such as foil wrap, soda cans, motor vehicles, aeroplanes, buildings, just to name a few.

Generally, after mining, the rare bauxite goes through a refining process which it converts it to alumina (the main component in aluminium production).

After conversion, it is shipped to countries, such as North America and Europe, where it will be converted to aluminium. In some cases, however, the raw bauxite ore is shipped.

Nicknamed the "Red Gold" because of its luminous red colour and significant economic contribution, bauxite and the bauxite industry, has placed itself as a vital revenue contributor in Jamaica.

The bauxite industry is known as the largest non-service industry in Jamaica. Not only does it have a positive impact on the country’s revenue generation, but it has also been regarded as a major foreign exchange earner.

In addition, the bauxite sector has been known for generating employment opportunities for Jamaicans, hence helping to improve the employment rate.

Many individuals have advocated for Jamaica to build an aluminium smelting plant so that we can produce our own aluminium. And while this idea is excellent, we must admit that smelting plants require a vast amount of energy which can prove to be expensive.

It must be noted, however, that bauxite isn’t really versatile. In fact, the use of bauxite is somewhat limited to aluminium production. Hence, the main use of bauxite in Jamaica is to convert it to alumina for exportation.

However, let’s not detract its importance, as aluminium plays a vital role in creating a number of items.

Before you go, let me share with you a few of the bauxite and alumina companies that help to get our bauxite around the world:

Be sure not to miss our related articles on the use of gypsum in Jamaica and natural resources found in Jamaica.