What did the Tainos contribute to Jamaica? 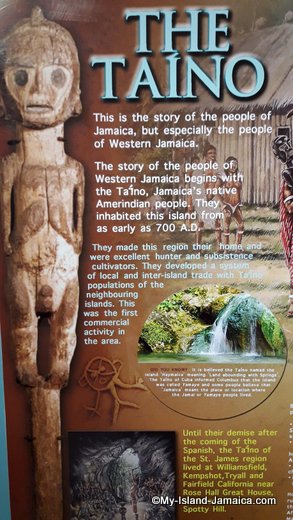 As our Independence celebration here in Jamaica is fast approaching, we remember our fore fathers, those who paved the way for the present generation.

Our African ancestors are usually the most popular topics of discussions during this time. However, it is important that we highlight and give credence to the indigenous people of Jamaica, known as the Tainos.

In some books you may see them being referred to as the “Arawaks”.

The Indigenous People of Jamaica

It is believed that the Tainos were the first group of people to make the island of Jamaica their home.

Their arrival to the island was quite an interesting one. The Tainos were one of the Amerindian people who originated from Central East Asia. As their main source of food (buffaloes, deer and hairy mammoth) started to deplete, the Amerindians left their homelands in search of food.

Their journey commenced during the ice age travelling across the Bearing Strait and entered into North America. Many Amerindians settled in Northern America, but some Amerindian groups, including the Tainos, continued their journey and settled in South America.

After some time, the Tainos sailed to the Caribbean through the Orinoco River in South America and began inhabiting the islands of the Caribbean. The Tainos were known to have settled in the Greater Antilles, Jamaica including, bringing their culture with them.

The Tainos lived simple lives and were described as a quiet, peaceful group of people. These sentiments were echoed by Columbus when the Tainos greeted and showed hospitality to him and his crew upon their arrival.

Physically they were portrayed as being short in stature with olive skin and dark hair. The Tainos did not wear much clothing. Men and unmarried women were usually naked, while married women wore skirts.

However, the most noticeable aspect of their appearance was their body painting. Body paintings were important for ceremonial purposes and when men were going to war.

In addition, they adorned themselves with feathers and ornaments made of gold, shells and other semiprecious stones. Another noticeable physical feature of the Tainos, was their flattened forehead. This was common practice that took place during infancy, where a board was tied to the child’s forehead resulting in them having a flatten forehead.

Like any community, the Taino villages had a social structure. In each village, there was a leader called a cacique, who was at the top of the hierarchy. The cacique had many privileges, such as receiving the best food, living in a larger house and having several wives.

The Tainos diet consisted of a variety of fruit and vegetables that they introduced to the island. For protein, they would fish and hunt small animals, such as iguana, coney, and agouti. They were also noted to be weapon-less and only carried wooden spears and bows and arrows to protect themselves.

However, with the arrival of the Spanish (Columbus) in 1494 to Jamaica, the Jamaican Tainos way of life, as they knew it, changed forever.

Their relaxing, peaceful island paradise transitioned into a mining industry. Tainos who would usually spend their day farming for their families, were now being forced to work in the mines and smelting camps as a result of the Europeans desires to amass gold and silver.

The men dug while the women washed the soil in pans searching for grains of gold and silver. In addition, the Tainos were also forced to smelt the gold into ingots for transportation to Spain.

The harsh treatment inflicted upon them by the Europeans soon caused the Taino race to be completely wiped out. However, some share contrary views. Some believe that the few Tainos who escaped the Europeans sort refuge in the mountains and co-existed with the Maroons.

Whether these ideologies are true or false, the fact still holds that the remnant of the Taino existence and impact on Jamaica is still quite visible.

What has the Tainos contributed to Jamaica? 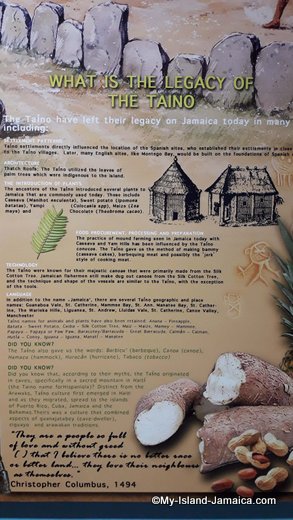