What is the Function of the Supreme Court in Jamaica? 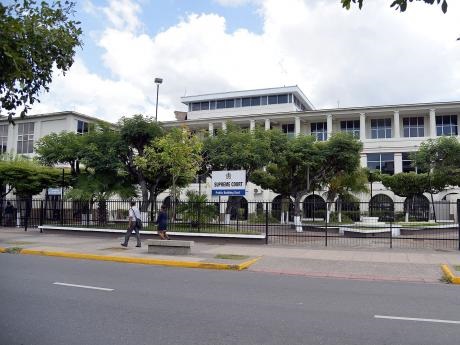 The Jamaican legal system is based on the Common Law system.

The common law system originated from the British system (the whole commonwealth follows this judiciary) and is centred on societal customs, norms and the judgements over them to be enforced as outlined by the court.

This means that the Jamaican court makes decisions based on prior judgements except in the case of the Supreme Court where the previous decision becomes a persuasive authority.

This is because of the principle of stare decisis which means let the decision stand especially when the cases are significantly similar.

The Court Structure In Jamaica

The courts in Jamaica can be classified according to the two (2) branches of government: Parliament (Legislative) and the Prime Minister (Executive).

The figure below shows a visual of the Jamaican court system which has five (5) levels. 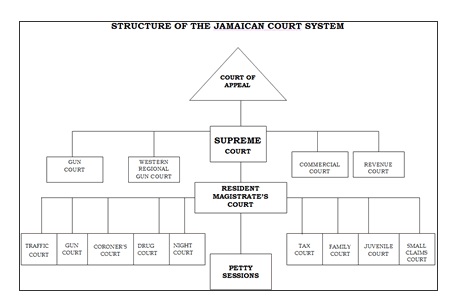 The two lower levels of court in Jamaica were passed by statutes from the Jamaican Parliament.

The lowest of the court ranking is the petty court which is for minor cases presided over by two (2) Justices of the Peace (JP) per session.
Fig.1 Jamaican Court System

Above the RM and specialised courts is the Supreme Court.

The Supreme Court is the third level judicial authority in Jamaica and is presided over by the Chief Justice which comprises of Puisne Judges.

Above the Supreme Court is the Court of Appeal which is the highest authority on the island.

The Court of Appeal may take cases not only from the Supreme Court but also the Resident Magistrates Court (RM).

Finally, in very rare circumstances does a case may go beyond the island and appeal to Her Majesty’s Privy Council in England.

Do note that if the Caribbean Court of Justice is successfully established then the Privy Council will be replaced.

The figure above does not show this fifth level of the court structure.

Functions of the Supreme Court

The Supreme Court was established under chapter seven (7) of the Jamaican constitution.

There are four (4) functions of the Supreme Court:

The Supreme Court is presided over by a chief justice. The current chief justice is The Honourable Justin Bryan Skyes (CD).

Since Jamaica’s independence we have had eight (8) chief justices over the years namely:

Regarding civil matters the court deals with cases on negligence, breach of contract, slander, trespass, divorce, equity, guardianship of infants and estates of lunatics. Please note that civil jurisdiction is only within Kingston.

The criminal cases of the Supreme Court are handled by the Circuit Court after committal by Resident Magistrates.

The head Circuit Court in Kingston (capital city) is called the Home Circuit and other specialized courts such as the Gun Court and the Revenue Court are co-jurisdiction with the Supreme Court.

The Supreme Court issues writs and summonses under the three previously mentioned divisions.

Decisions of the Supreme Court may be appealed in the Appeal Court.

However any matter tried in a lower court may be appealed in the Supreme as previously mentioned. The Supreme Court does not pass legislations.

Additional information can be found at: