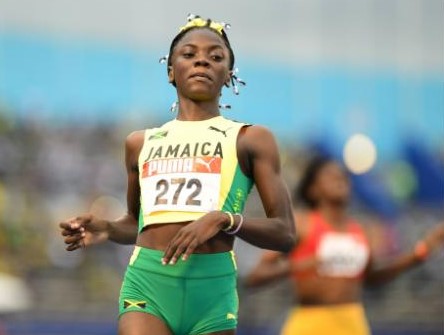 At the 2017 Boys and Girls Championships in Jamaica, Brianna Lyston broke the 200-meter sprint record, and as a result of her accomplishment, she has been compared to the great Usain Bolt.

After breaking the previous record twice in the Class Four 200-meter sprint at the 2017 Boys and Girls Championships, the 12-year-old Jamaican sprinter blazed a path to glory.

After finishing first in the 200-meter sprint final in Kingston, Jamaica, in 23.72 seconds, Brianna Lyston drew comparisons to her illustrious countryman Usain Bolt.

Her timing came up just two seconds short of Florence Griffith Joyner of the United States, who set the senior world record in the 1988 Olympic Games in South Korea (21.23 secs).

Although it was quicker than the meet record, which had already been surpassed by a sub-24 performance in the semifinal's second heat. Joanne Reid's time of 24.21 seconds in 2015 served as the previous meet record.

Lyston completed the 100-meter sprint in 11.86 seconds, also in the Class Four division, which was super impressive for her age.

Since she was ten years old, Lyston has been in the spotlight. She finished the 300-meter sprint at the 2015 Caribbean Union Teachers Championships in Trinidad and Tobago in 42.41 seconds, over a second faster than the male winner of the same competition.

At the same age, Bolt wasn't regarded as a fully developed sprinter because he participated in various sports rather than concentrating solely on athletics.

However, the multiple world record holder had taken home his first medal at the annual high school championships in the same competition in 2001. He had won silver in the 200-meter sprint with a time of 22.04 seconds.

What is she up to now?

After committing to Louisiana State University (LSU), the now 18-year-old Jamaican sprinting prodigy, Brianna Lyston, will compete in the NCAA in the upcoming season.

Rising American sprinter Sha'Carri Richardson also attended LSU, where in 2019 she won the National Division I title and set an NCAA record with a time of 10.75.

In Jamaica, sprinting has a long history, and Brianna appears to be ready to participate. With the potential she displays and Jamaica's strong running heritage, she undoubtedly possesses the tools necessary to advance and become a global superstar.

She appears to be talented enough to carry on and aid Jamaica in continuing to make athletic history if she keeps competing at such a high level.