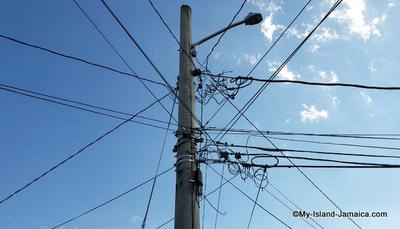 See Also: How to apply for electricity in Jamaica?

How times have changed! Can you imagine a Jamaica today still using kerosene oil to fill lamps and make bottle torches to light your way or for your homes? Or to put in stoves designed for the purpose to cook your meals? Battery operated flashlights would have been the only other option for lighting for those who could afford it. Streets so dark, that at times you can’t see the person next to you. No televisions, no refrigerators, no internet! just a few battery operated radios. You literally had to make hay while the sun shines, and why? There was no electricity. Sounds terrifying, doesn’t it? This great commodity, often taken for granted but indeed a true luxury was not available as it is now. Today, about 99% of Jamaicans have access to electricity but how did it all start?

When Did Jamaica Receive Electricity?

Can you believe that Jamaica was one of the first countries in the world to receive the precious commodity of electricity? I bet you didn’t know that! Electricity actually came to the island in late 1892, when the Jamaica Electric Light Company was established on Gold Street, Kingston, with the use of a small, coal-burning steam generator. This was a great achievement for Kingston (just 19 years old at the time) as many British cities still did not have electricity. Thirteen years later, Thomas Edison invented the first light bulb or electric lamp.

Since then, electricity in Jamaica has transformed and also transformed the lives of the people. Let’s take a walk down memory lane and look at what has happened over the years.

The Office of Utilities Regulation (OUR) regulates the electricity sector in Jamaica, which includes the Jamaica Public Service Company Limited (JPS) and any other Independent Power Producers (IPPs).

Whew! Electricity in Jamaica has certainly come a long way. Today, with over 99% of the population having access to this precious commodity, facilitating all the things we have come to love and enjoy such as well-lit streets, televisions, fridges, stoves, INTERNET, and just about everything that can be powered up, we can say that we are truly blessed as there are still many parts of the world that do not have this opportunity. Of course, we know that the cost of electricity or energy does not come cheap. Many times power supply gets disconnected due to non-payment of high electricity bills. So, the next time you leave something plugged in or turned on unnecessarily, remember it is precious and many do not have it, plus your bill will be climbing! So remember to conserve!

Editor's Note
What would you like to know about Jamaica? Submit your question here! With well over 2000 questions already answered, chances are we can assist :-)