Is Jamaica An African Country? 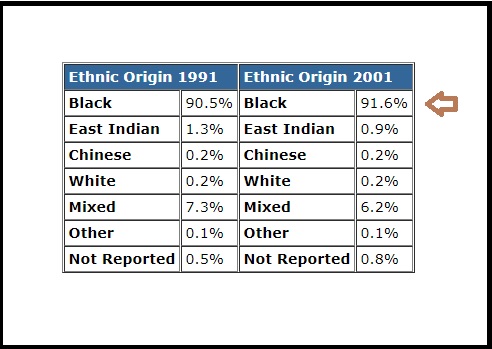 Is Jamaica An African Country?

Related: What Is Black History Month?.

No, Jamaica is not, geographically and politically, an African country. Jamaica is actually an idependent country situated in the Caribbean (considered part of the North American Continent) sea.

Jamaica gained political independence from the British in 1962.

However, this question, depending on who you ask, could easily be answered YES as well.

That's because over 90% of Jamaicans are of African heritage!

In fact, according to the latest information available from the Statistical Institute of Jamaica (Statin), 91.6% of Jamaicans are black! (See image above)

If you know anything about this history of Jamaica, you'll note that Jamaica shares an 'umbilical' relationship with the continent of Africa.

Most of blacks in Jamaica has ancestral roots in Africa, particularly from the West Coast. Africans first arrived in Jamaica in 1513, been forcibly captured in their homelands and sold as slaves to the Spanish settlers here.

They served as body servants, cowboys, hunter and herders of wild horse, pigs and cattle then.

The knowledge they gained of Jamaica's interior became invaluable as when the English took the island from the Spanish in 1655, many escaped in the mountains to be later called maroons.

When the expanded sugar plantation system required more labour, millions of Africans were later forcibly taken to the so called New World, which included Jamaica, North America and the Caribbean.

Note also that between 1837 and 1867, following emancipation, another estimated 11,000 Africans arrived in Jamaica to work as indentured laborers on the sugar estates.

These Africans, it is said, arrived from Central Africa, from the Yoruba and Dahomey coasts and the Niger Delta.

Many settled in Westmoreland, Hanover and St. Thomas. Some returned home but some remained and became a part of mainstream Jamaican life.

As you can imagine, not only does the African culture influenced the Jamaican culture, it dominates it!

Most of what we do, belief, eat and even how we talk, have roots in Africa, and with still over 90% of the population black, many Jamaicans consider themselves Africans.

Today Jamaica maintains strong diplomatic and political relationship with many African countries, including the 'twinning' of cities in Jamaica with others of countries in Africa, eg. Windhoek, Namibia.

Reggae music, which originated in Jamaica, came out of the inspiration of Jamaica's African origins.

You may also be interested in learning about the important events in Jamaica's history.