The Jamaica Coat of Arms
Its Design, Symbols & Meaning 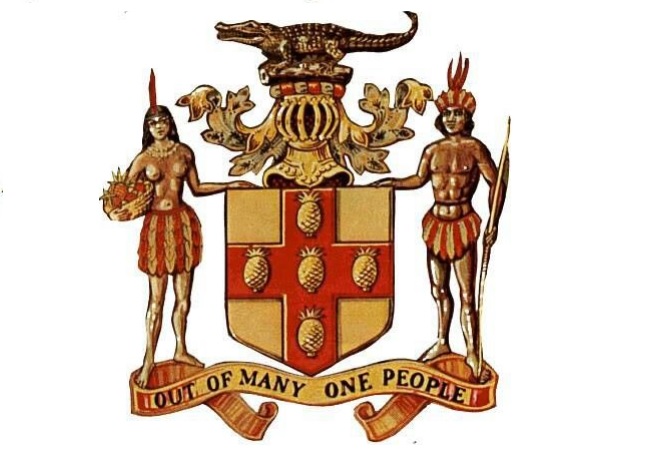 I must admit, the Jamaica Coat of Arms is perhaps one of the least popular of the National Symbols of Jamaica.

Regardless though, it is still quite significantly symbolic!

Who designed the Jamaican coat of arms?

Considered as a legacy from the British with slight modifications, the Coat of Arms was granted to Jamaica 1661 under Royal Warrant.

The original was designed by William Sancroft, then Archbishop of Canterbury.

Symbols On The Jamaica Coat Of Arms

Our national motto ‘Out of Many One People’ is represented on it. It shows a male and female member of the Taino tribe standing on either side of a shield which bears a red cross with five golden pineapples.

The crest shows a Jamaican crocodile mounted on the Royal Helmet of the British Monarchy and mantling.

The Meaning Of The Symbols

The Coat of Arms have undergone a number of changes since then, but it is perceived that the three main ones occurred in 1692, 1957 and 1962 respectively.

It may have been dispensed with, but the government and opposition then reached an agreement back decided that it constituted a "badge of great historical significance to the nation and should be retained".

All the figures on the coat of Arms represents Jamaica in different aspects:

Today, the Jamaica coat of arms appears on all our bank notes and coins as well as on national documents.

In many respects it is used as the final seal of governmental approval.

If interested, Wikipedida can provide you with a detailed history of Coat of Arms Here.

...even more informative pages about Jamaica below: