Who Lives At Jamaica House? 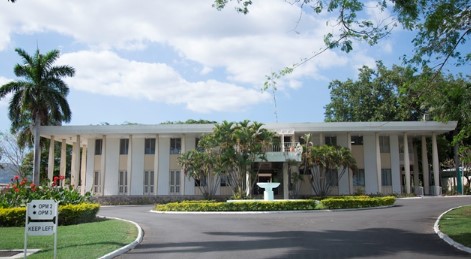 Jamaica House was the official residence of the Jamaican Prime Minister from 1964 to 1974. As is customary, an independent nation should provide accommodations for the sitting prime minister, whomever he/she may be. So, the question of where the Prime Minister would live after independence was just one of the many details to iron out before August 6th 1962.

Initially, the Mona Great House was proposed as a prime spot, which everyone thought could be purchased and converted for Jamaica’s prime minister’s home. This plan did not leave the planning stage however and the land was never purchased by the Jamaican government.

Before the elections, it was decided that the Vale Royale, the former residence of the Colonial Secretaries, was a suitable spot for the prime minister and his family to reside and so refurbishing efforts began and were completed in time for Jamaica’s independence. After the elections were won, however, the newly elected Prime Minister, Sir Alexander Bustamante found the home too small to accommodate his family and potential overnight guests who could be diplomats of other nations.

Because of this, the House of Representatives approved the construction of an official residence for the Prime Minister at the cost of £55,000 or JMD 110,000 at that time. 30 of the 187 acres on which the King’s House sat, were allocated to this project. The Prime Minister’s new residence was to be at 6 Hope Road, Kgn 6.

Vale Royale became the official residence of the sitting Minister of Finance. 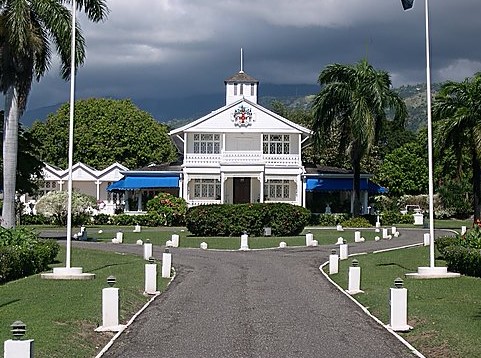 The house's design and official name were decided on through competitions opened to the public, kicking off with the design competition in 1963.

The design chosen was that of business partners Mr. Lloyd Shearer and Mr. Marvin Goodman. The prize? £200 or JMD 400 at the time.

Construction on the two-storey residence began and was completed that same year. The grounds, in addition to the main building, had outbuildings which held staff quarters, a gatehouse, cabana rooms and a swimming pool. The main building was outfitted with a front portico, banquet hall, the vestibule (reception area), the Prime Minister’s study and the living quarters separated divided into two wings on the second floor. Both wings came together on the first-floor landing bridge where both staircases joined.

The guest wing was a one-bedroom and bathroom suite, facing Hope Road. It also had a comfortable sitting room. The private prime minister's suite, had 3 bedrooms, bathrooms and a sewing room.

In the competition for the name of the residence, of the 74 entries, Jamaica House was the most fitting and the winning suggestion was for JMD 200.

The natural second step after construction is to decorate. This began in November 1963 with Mrs Joanne Sibley as the Interior Decorator. With a budget of £22,000, she purchased bedding, towels, furniture and appliances for the Prime Minister and his potential guests.

A huge portion of the budget and a great deal of time and effort went into the 160-yard banquet hall. There was specially printed gold and white embossed cotton selected for the drapes in the room. Specially monogrammed towels, silverware and napkins were made for the custom-made T-shaped table, which could seat 36 persons.

The Arms of Jamaica was replicated in a carving by the mahogany sculptor, Christopher Gonzalez. The decor followed throughout the home hall with plaques of mahogany and brass pineapples complete with decorative lights which adorned the otherwise blank walls below the French windows of the hall. The pineapple designs were also carved into the chairs' high back, which stood on bamboo-shaped legs. This leads me to wonder if this is what started Jamaicans' obsession with carving pineapples into the back of their dining room chairs (I have seen so many of them over the years). The stellar design was completed with the 6 ft 6 in tall chandelier which hung from the ceiling.

Five other chandeliers could be found at strategic points throughout Jamaica House.

After construction was completed on the residence, staff from the Royal Botanical Gardens assisted with landscaping efforts. The Mural and Pocket Park on the southeastern lawn and the Jamaica House Basic School were established in 1974.

Children from the surrounding area and the children of the staff from the Office of the Prime Minister went to school there. There was also a sports complex on the grounds.

A part of the grounds was used to construct the Louise Bennett Garden Theatre and the Ranny Williams Entertainment Centre buildings.

When was Jamaica House built?

Who lives at Jamaica House?

Sir Alexander Bustamante eventually moved into Jamaica House in 1964 and lived there until he retired from representational politics and as leader of the Jamaica Labour Party in 1967.

Most. Hon. Hugh Shearer also lived at Jamaica House during his time as Prime Minister.

Some updates were made to the home ahead of the 1972 elections, and Prime Minister Michael Manley moved in that same year.

In 1972, some government offices, including the Office of the Prime Minister were relocated to Jamaica House. Some rooms were converted to accommodate these changes.

Jamaica House was eventually abandoned for Prospect House in 1974, Michael Manley, found it rather challenging to live there with his family.

The offices were kept at Jamaica House, the original bedrooms and sitting rooms in the guest wing were used as offices for the Prime Minister’s Personal Support Staff and weekly meetings of the Cabinet were conducted in the Banquet Hall.
An additional wooden building was constructed and aluminium containers were acquired to accommodate additional offices.

Vale Royale, the original choice, was renovated for the tenure of the Most. Hon. Edward Seaga who served as Minister of Finance at the time as well. Subsequent Prime Ministers, honourable ministers, Michael Manley and P.J. Patterson also used Vale Royale as their official residence.

Where does Jamaica's Prime Minister live?

Today the Prime Minister lives in his own residence. The Jamaica House Building is used for offices and Vale Royale has once again been left unoccupied.

The residence is now used as a meeting place for bipartisan talks called Vale Royale talks, between the JLP and PNP, other meetings and hosting held by the Prime Minister and the annual luncheon of the members of Parliament of Jamaica.

The grounds are often used as the location for treats held for the elderly or children. It is not open to the public.

References & Sources For Who Lives At Jamaica House?