The Distinctive
Language of Jamaica


The official language of Jamaica is English, Jamaican English. Standard Jamaican English is a dialect of English encompassing in a unique way, parts and mergers of both American and British English dialects.

Although the distinction between the two is best described as a continuum rather than a solid line, it is not to be confused with Jamaican Patois (what linguists call Jamaican Creole), nor with the vocabulary and language usage of the Rastafarian movement.

By the way, "Patois" or Patwa is a French term referring to regional languages of France, which include some Creole languages. But, in Jamaica, it refers to Jamaican Creole, which Jamaicans have traditionally seen as "broken", "bad", or incorrect Standard English.

Jamaican Standard English is grammatically similar to British Standard English. Recently, however, due to Jamaica's proximity to the United States and the resulting close economic ties and high rates of migration (as well as the ubiquity of American cultural/entertainment products such as movies, cable television and popular music), the influence of American English has been increasing steadily.

As a result, structures like "I don't have" or "you don't need" are almost universally preferred over "I haven't got" or "you needn't".

In defining the language of Jamaica, it must be noted that the most noticeable aspect of our English for speakers of other varieties of English is the pronunciation or "accent".

In many ways, the accent bears great resemblance to that of southern Ireland, particularly Cork, possibly a remnant of Jamaica's former colonial ties. Jamaican Standard pronunciation, while it differs greatly from Jamaican Patois pronunciation, is nevertheless recognizably Caribbean.

Jamaican Standard English and Jamaican Patois, however, exist side by side on the island in a typical diglossia pattern. Creole is used by most people for everyday, informal situations - it's the language most Jamaicans use at home and are most familiar with; it's also the language of most local popular music.

Jamaican English, on the other hand, is the language of education, high culture, government, the media and official/formal communications. It's also the native language of a small minority of Jamaicans (typically upper class and upper/traditional middle class).

Most writing in Jamaica is done in Standard English (including private notes and correspondence). Jamaican Patois has a standardized spelling and has only recently been taught in some schools.

As a result, the majority of Jamaicans can read and write Standard English only, and have trouble deciphering written dialect (in which the writer tries to reflect characteristic structures and pronunciations to differing degrees, without compromising readability).

Written Creole appears mostly in literature, especially in folkloristic "dialect poems"; in humoristic newspaper columns; and most recently, on internet chat sites frequented by younger Jamaicans, who seem to have a more positive attitude toward their own language use than their parents.

Jamaicans choose from the varieties available to them according to the situation. A Creole-dominant speaker will choose a higher variety for formal occasions like official business or a speech, and a lower one for relating to friends; a Standard-dominant speaker is likely to employ a lower variety when shopping at the market than at her workplace.

Code-switching can also be metaphoric (e.g., a Standard-dominant speaker switching to a lower variety for humoristic purposes, or to express solidarity). 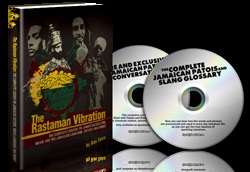 Simple Course To Learn The Language Of Jamaica

There are many literature around that can help you to learn the language.

One such is written by Ras Zuke called ' The Rastaman Vibration' a  simple but detailed 27 course lesson.

You can get the course here instantly.

References & Sources For Language of Jamaica