The ones currently in circulation can be seen here, in my hand. 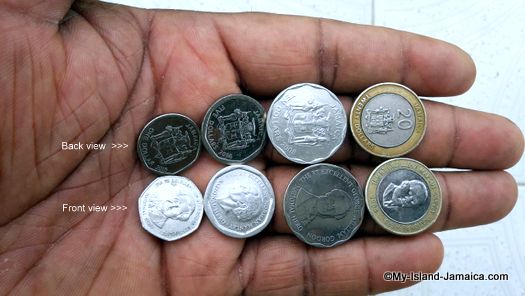 Most of them, by the way, features our National Heroes. The earliest money in Jamaica however, were Spanish copper coins called maravedíes.

In later years, as the island became increasingly important to the British Empire, various other silver coins showed up, including Spanish pesos and reales, and the British pounds, shillings and pence.

The Spanish coins were the most common, in denominations ranging from ½ real (or 1/16 dollar) to 1 dollar (peso). The exchange rate between peso and shilling was set at 1 peso = 4 shillings.

In 1834 silver coins of threepence and three ha'penny (1½ pence) were introduced, valued at ½ real and ¼ real. The three ha'penny came to be called "quartile" or "quatties."

The quattie in particular was used in church collections due to a feeling by the black population that copper coins wereinappropriate for that purpose. Hence, they came to be called "Christian quatties".

In 1839 an act was passed by Parliament declaring that as of December 31, 1840, only British coinage would be legal tender in Jamaica, demonitizing all of the Spanish coins, with the exception of the gold doubloon which was valued at 3/4/- (three pounds four shillings).

Coins in use were thus the farthing, ha'penny, penny, penny ha'penny, threepence, sixpence, shilling, florin (2 shillings), half crown (2/6), and crown (5/-).

Following emancipation in 1838, when the freed slaves became wage earners, there was a greater need for ready cash, especially for values smaller than penny ha'penny.

The copper and bronze coins of the British Imperial coinage were still unpopular among the Negro population who refused to use them, so an acceptable metal had to be found for coins of these denominations. Cupro-nickel, which was just gaining popularity as a metal for coinage was to provide the answer.

By the Order in Council and Proclamation of 11 November 1869, and by local laws, the penny and half-penny made of cupro-nickel were authorized to be struck for use in Jamaica.

They weighed the same as the English coins of similar value, but had the Jamaican coat of arms on the reverse. As the British silver coins were accepted, there was no need for higher denominations of Jamaican coinage.

Listen to this now!

The pennies and half-pennies, minted in 1869, constitute the first truly Jamaican coins.

In 1880, the range of denominations was extended when a farthing was introduced. In 1937, when the worn coins were being replaced, the metal content was changed to nickel-brass.

By this time, old fears and distrust had disappeared and there were no problems associated with this change. The farthing, first issued in 1880 was issued for the last time in 1952.

Alterations in the designs of these first Jamaican coins were made when British sovereigns changed, the sizes were reduced in 1937 and an up-dated version of the coat of arms was used in 1964 following independence in 1962.

Since independence, quite a number of denomination of Jamaican coins came into circulation. Below are pictures of the most current in circulation including the commemorative "Bob Marley coin" issued in 2006.

By the way, if you are looking to get souvenirs Jamaican coins, take a look at the Bank of Jamaica's souvenir coin department.

Here too are some older versions

And please, don't miss these related pages! Quite informative too.