What Is The Official
Currency Of Jamaica? 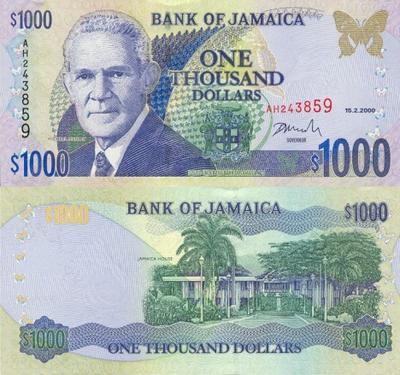 The Jamaican Dollar (JMD) is the official currency of Jamaica. It is divided into 100 cents.

History Of The Jamaican Currency

The first money in Jamaica was Spanish copper coins called Maravedis. Later, other silver coins were implemented, as the British began to rely on Jamaica to a large extent.

Spanish pesos, reales, and British pounds, were all at one time circulating in Jamaica.

In 1839, Parliament passed a law that disallowed all currencies, except for British coinage, as legal tender. From 1904, the first government distributed and authorized banknotes were introduced.

In 1960, the Bank of Jamaica was given the sole responsibility of producing coins and banknotes."

On January 30, 1968, the Jamaican House of Representatives voted to decimalize the currency by introducing the dollar, worth 10 shillings, to replace the pound.

Coins and banknotes went into circulation on September 8, 1969.

What's With The USD?

Although the Jamaican Dollar is the legal tender of Jamaica, the US dollar is widely accepted. It is unofficially OK to use the $US anywhere, although it is recommended that you convert your foreign currency into local dollars before transacting business.

You can exchange money and traveler's cheques at a number of hotels and in banks. Many establishments accept US traveler’s cheques, although I don't recommended it becuase of the costs to travellers; MultiLink ABMs / ATM's are a better bet, in my opinion.

Cash withdrawals are possible from automated teller machines (ATMs) linked to the Cirrus system (see the back of your bankcard).

Most of the larger establishments, in addition to hotels, accept credit cards.

Denominations Of The Jamaican Dollar (JMD)

The Bank notes in circulation were:

Today the value of the currency - relative to its international trading partners, continues to decline. In fact, it is quite funny that we still continue to circulate the $1 coin even though no one uses it!

I'm been honest, no one really uses it anymore! Even the boys who wipes the car screens at the stop lights frown at it - and that is understandably as it, in colloquial saying, 'can't even buy an icy mint'.

Be sure to read my article on What Can $1 buy in Jamaica for even more insight.

And Where Is Jamaican Money Printed?

For coins, the Royal Mint (UK), Royal Canadian Mint, Royal Dutch Mint and Mint of Finland are the printers.

You can learn more about the printing of Jamaican money here.

What's The Latest Exchange Rate For The Jamaican Dollar?

You can get the latest rates on the BOJ's Website. [opens in a new window]. Look for weighted average rate.

You may also use the currency conversion widget below, courtesy of Xe.com.

To see pictures, as well as to learn the features of each Jamaican bank notes, follow the following link (Jamaican Bank Notes In Circulation (Pictures)

Pages Related To Currency Of Jamaica

Back to Top of Currency of Jamaica