The Return of Buju Banton (The Gargamel) 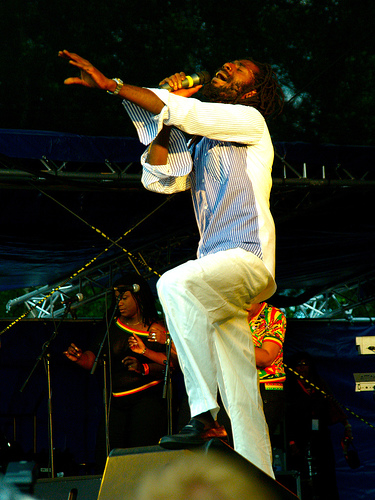 Whether you were browsing through the various social media platforms, surfing the web or casually tuning into your favourite Jamaican radio station, you would have realized that #Buju Banton was a hot trending topic.

And, even as I type this article, I am enjoying his music, emanating from my neighbour’s stereo system.

Yesterday (December 7, 2018) at approximately 7:30 pm, the 'Gargamel', Buju Banton landed on home soil after being incarcerated for eight years in the USA (McRae Correctional Institution) on drug charges.

But even before he landed in the island, photographs and video footage was circulating around social media showing the reggae artiste on route to the island.

Upon his landing at the Norman Manley International Airport in Kingston, fans flocked the airport to catch a glimpse of the star.

The return of Buju Banton has definitely been a long awaited occasion, especially for reggae fans and those who are a part of the reggae fraternity. Buju's music has stood the test of time - remaining relevant to society, despite him being physically absent in the island.

However, due to good behaviour the star got his prison sentence reduced. While being incarcerated, Buju Banton sought to make the best of his situation. The star attained a Masters Degree in Music Business Management on June 7, 2016 form the University of New York.

The reggae star was born on July 15, 1973 in Kingston, Jamaica. His birth name is Mark Anthony Myrie.

He actually got the name ‘Buju’ from his chubby like appearance as an infant and ‘Banton’ was taken from one of his favourite deejays and mentors ‘Burro Banton’.

His nickname ‘Gargamel’ was derived from his facial resemblance to a cartoon character in The Smurfs series.

Buju hailed from Salt Lane in Kingston and was the youngest of the fifteen siblings.

Buju Banton began to display his remarkable talent as early as age 12. He was formally introduced to the world with the recording and release of his first single “The Ruler” in 1986, produced by Robert Ffrench.

His ‘husky’ voice made the singer distinctive and alluring. His songs themselves were also unique, showcasing his versatility and lyrical talent. He sang about a variety of topics: love, romance, Rastafarianism, Jamaican culture, politics, poverty, oppression and sexuality.

His lyrics have been described as resonating and impeccable, as well as controversial.

Noted as one of the most sort out artiste in the 1990’s, his songs have been an indispensable commodity and his music transcended throughout the years, releasing 10 albums in his (to date) 20 year career:

His work also won him international acclaim. Albums such as, “Inna Heights” “Friends for Life”, “Too Bad” and “Rasta Got Soul” have been nominated for Grammy Awards in the category of Best Reggae Album.

He finally won his first Grammy Award for Best Reggae Album in 2011 for his ‘Before the Dawn’ album.

By the way, what’s your favorite Buju Banton song?Tell us in the comment section below.

What's Next For Buju

The question of what’s next for the star is on the minds of all Jamaicans and fans of Buju worldwide.

It will certainly be interesting to see just how the Gargamel reintegrate himself back onto the music arena after such lengthy absence.

It might not appear to be difficult given that Buju Banton is a household name. However, the music industry and reggae music itself has evolved over his 10 year absence. It’s definitely not an easy road.

His devoted fans are looking forward to him continuing his distinctive music; I'm getting a funny feeling that he'll be exceeding their expectations.

The next 3-6 months will be exciting!

N.B. Be sure to read more on Jamaica's Reggae Music here.