What are some natural disasters in Jamaica? 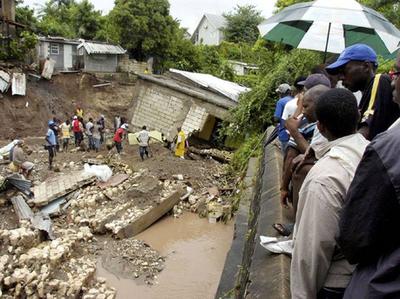 The Aftermath of A Hurricane

Natural disasters can be described as horrors of nature which come about from the natural processes of the Earth. Many lives have been lost, property destroyed, economies collapsed and the spirits of people have been shattered due to the ravage of several natural hazards.

A country’s geographical structure and location however is also another factor. Jamaica has had its own fair share of natural disastrous events, some more serious than others.

I'll now share with you some of the natural disasters that typically occur in Jamaica.

Landslides are the collapse of earth from a mountain or cliff. Landslides occur due to an increased gravitational pull when weight is added to the rock mass. They usually occur due to various factors, such as the vibration from earthquakes and water-logging (caused by rainfall) that saturate the top layers of unstable soil and cause it to slide downhill.

Lightning is another phenomenon of nature and another of the ones that occur in Jamaica, albeit infrequently. It is an atmospheric discharge of electricity that typically occurs during thunderstorms. It seeks the shortest path towards the ground, as such, the tallest object within its path is usually struck. If you are unfortunate to be in its path, you could be struck, which may lead to you being rendered paralyzed or even killed!

By the way, did you know that there are various types of lightning?

Floods are known to have long-term and widespread effects that result in property and infrastructure damage, loss of crops and, at times, loss of life. Flooding often occurs during times of intensive rainfall. Therefore, when other natural disasters, such as hurricanes that are accompanied by rainfall occur flooding is likely.
We have several so-called 'flood-prone' areas here in Jamaica, usually recorded by the parish.

In my home parish of St. James, here is a list of the main flood-prone areas.

If you wish to know the flood-prone areas in your parish, visit the Office Of Disaster Preparedness Website at http://www.odpem.org.jm

Hurricanes are massive, violent storm systems that form over warm waters and move toward land. This is by far the most common natural disaster in Jamaica and is the cause of the Caribbean’s most catastrophic events.
The Caribbean’s tropical temperature and warm ocean waters have made it a haven for hurricane development. Also, since we are located in the Atlantic belt, we are susceptible to the full effect of these storm systems.
The Atlantic Hurricane Season lasts from June 1 to November 30. A potential hurricane goes through 4 phases before it can be considered a hurricane:

Once a storm has garnered windspeed of 74 mph and more it is classified as a hurricane. As windspeed increase so does the damage that the hurricane can cause.

This natural disaster is of great concern to those individuals who live close to the coastal region. A storm surge is an abnormal rise in the water level along a shoreline produced by a meteorological disturbance such as hurricanes (ODPEM).
According to ODPEM, as a hurricane passes on the surface of the sea, it will create massive waves which flood the shoreline. As the water levels begin to rise and the waves hammer the shoreline it causes coastal erosion, flooding, scour roods, undercut sea walls and demolishing buildings.

So if you’re at risk of storm surges you should:

While Jamaica has never been affected by a tsunami, there has been an increase in awareness since the catastrophe that occurred during the 2004 Indian Ocean tsunami.
For those who don’t know, a tsunami is a series of waves that can travel at speeds averaging 450 - 600 miles per hour in the open ocean. As the waves come closer to the coast, their speed decreases and their amplitude increases. Tsunamis are produced by earthquakes, underwater landslides and volcanic eruptions. There are several risks associated with a tsunami, such as flooding, contaminated water and destruction of infrastructure.

Since earthquakes are a trigger for tsunamis if you feel a strong quake stay away from places where a tsunami can occur, such as beaches and the coastline.

I also recommend you read The Hurricane Season In Jamaica.