What are the three arms of government in Jamaica?

What are the Three Arms of Government in Jamaica? Answered by Kesha Stewart, Associate Writer 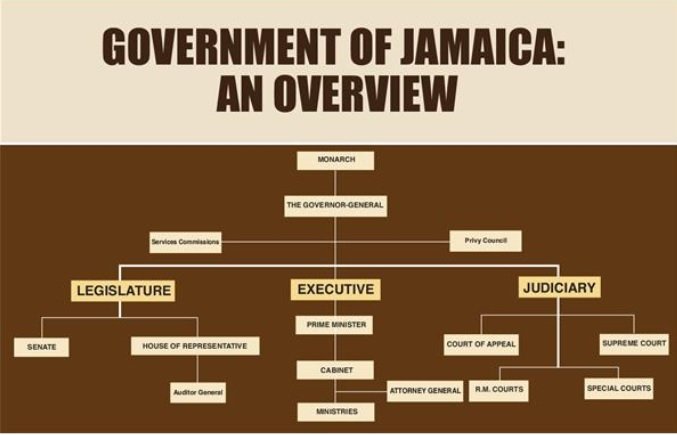 The three arms of government in Jamaica are, The Executive, The Legislature and The Judiciary.

Do you know/remember the book “Civics for Young Jamaicans”? My word! It was a prized possession in my school days as we did a course called Civics.

I must confess that I loved the course and the book as well. Mr. L.C. Ruddock wrote this helpful and informative book which taught me a great deal about governance, how government is structured and the arms of government in Jamaica, as well as how national symbols, such as the national flag, should be treated.

If you’re old enough to remember actually using that text then I won’t embarrass you but you are probably as old as or a little older than me. If you don’t know the book, well don’t worry, in this article I'll enlighten you on the composition and structure of these three arms of governement.

With a particular bias to our British Colonial links, Jamaica uses the Westminster- Whitehall system of government which is British based in its design and execution.

We are described as a “constitutional monarchy” (JIS, 2016). Queen Elizabeth II is our Head of State and the Governor General (GG) represents her here so the government acts as Head of State and is the first citizen of the country.

So yes, this Westminster-Whitehall system consists of three distinct arms of government:

Although they interrelate, there are very distinct functions and features which lend individuality to each part.

The system dictates that each Jamaican having attained the age of 18 has the right to vote to elect the persons who will carry on the affairs of the country. This is known as Universal Adult Suffrage. Unfortunately, you lose this right if you are incarcerated or mentally unfit.

The arms of Government are all interconnected though and work through agencies, departments and Ministries to maintain stability in the country.

Sources:
1) Jis.gov.jm
2) In a Nutshell The Jamaica Constitution, 1962 - Kingston Jamaica