See Also: How Do Jamaicans Celebrate Christmas? | 10 Special Events In The Holiday Season 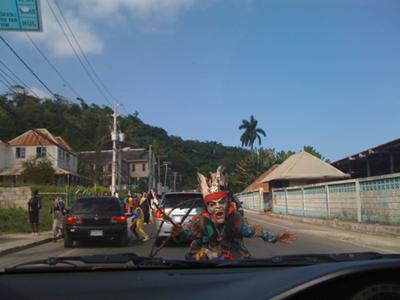 Photo: Jonkonnu Parade in Jamaica
As people grow, and their interests change, new traditions will emerge. While this isn’t always the case, sometimes this means old traditions will not be practised as frequently as before. For a Jamaican Christmas, there are a few of these traditions which are unfortunately on their way out or have already gone entirely.
I think many of the changes now are due to how expensive a lot of these things have now become. Scaling back on decorations and just spending, in general, is important to not be overwhelmed by your responsibilities come new year. Additionally, many of us have to work right up to Christmas Day or for others even the very day is a workday still. Sometimes getting Christmas Day off is just a good day to catch up on some well-needed rest. For others, their belief systems change and Christmas is no longer a celebratory event, and that’s okay.

Either way, there are others, (like me) who still quite enjoy the holidays and the festivities and while we may not be able to partake in all the events it is good to mix in the old traditions with the new and have a wonderful Jamaican Christmas!

I also recommend you read, 11 Signs It's Almost Christmas in Jamaica.

Editor's Note
Share your comments here. We would love to know what you think!