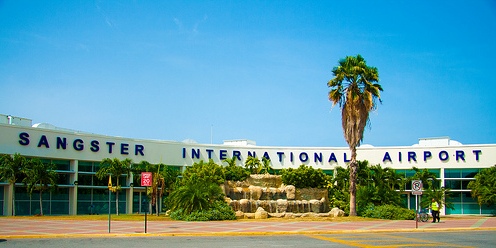 We currently have two major airports in Jamaica,

There are however, another 4 domestic ones that help to transport both cargo and passengers around the island.

The Norman Manley International Airport, formerly the Palisadoes Airport, is the airport that serves Kingston and its vicinities primarily. It was named in honour of Norman Washington Manley, one of our seven national heroes.

There are over 130 international flights a week that depart from the Norman Manley International Airport.

For a listing of the airlines that serves this airport, click here.

The Sangster International Airport in Montego Bay, St. James, is one of the largest and busiest airports in the Caribbean.

Often referred to as the gateway to the Caribbean, it serves as the most popular airport for tourists visiting the north coast of Jamaica.

MBJ, as it is called, is currently the busier of Jamaica's two main airports. The airport of course, is named after one of our former Prime Minister, Sir Donald Sangster.

MBJ has made significant strides over the years taking it to heights comparable with any international airport globally.

However, the development of the airport did not happen overnight, but was first conceived in 1936 when the site now housing the Sangster International Airport was identified as one suitable for the construction of an airport in the town of Montego Bay.

Originally named the Montego Bay Airport, a decision was made to build the runway in 1940, and the actual construction of the facility was completed on February 18, 1947.

At the time of its completion, the town of Montego Bay was more like a playground for the rich and famous, and was considered then, one of the premier vacation spots within the Caribbean, just as it is today.

The first international airline to fly into the Montego Bay Airport was Pan American Airways, and in fact, the airport, which in comparison to today's standards, was more like a small aerodrome, was operated by Pan American until September 30, 1949, when the Government took control of the facility.

Over the years, the upgrading process was a continuous one, ultimately the facility had grown into the larger of the two international airports in Jamaica, handling approximately 5.6 million passengers per year back in 2004.

The largest of Jamaica's three domestic airports is Tinson Pen Aerodrome in Kingston. It is situated on Marcus Garvey Drive, a significant thoroughfare that connects Kingston to the neighbouring town of Portmore. Additionally, a transshipment port called Kingston Free Zone is close to the airport. Business travelers are the main clients of the airport. Additionally, the airport serves as a crucial commercial conduit between Kingston and Montego Bay.

This relatively small airport mainly serves the tourist area of Negril. However there has been some renovation in recent years and talks about increasing the runway size and eventually accepting international flights have been happening.

The airport bears Ian Fleming's name, who is well known for creating the most well-known fictional spy in history, JAMES BOND. Just five kilometers from the airport is the picturesque village of Oracabessa, where Ian Fleming wrote fourteen (14) of the JAMES BOND-starred novels at his Jamaican home, Golden Eye. IFIA is located in the village of Boscobel, 15 kilometers from the popular tourist destination Ocho Rios, and is the perfect entry point for even the most discerning traveler.

Northeastern Jamaica's Ken Jones Aerodrome is an airport that is situated 10 km west of Port Antonio. It benefits nearby tourist destinations as well as local transportation. Air Jamaica Express used to offer scheduled passenger service at the airport.

In the upcoming years, it is expected to see all the domestic airports become more active and international.

References & Sources For Airports in Jamaica