The Lyrics Of
The Jamaican Bobsled Song 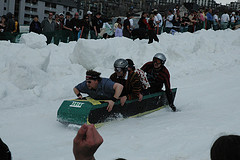 “Nuff people say they know they can’t believe, Jamaica we have a bobsled team”. That is the first line of the J'can bobsled song :-)

Imagine a country where the average temperature throughout the year is  in the high twenty degrees Celsius, never had snow- but has a bobsled team! This I believe is irony at its best.

The song is a part of the soundtrack for the 1993 comedy film “Cool Runnings” written by Lynn Siefert, Leon Robinson and Doug E. Doug.

It tells the true story of the four resilient Jamaicans who, with the help of Irving “Irv” Blitzer an American disgraced bobsled gold medalist that was disqualified and came to Jamaica to “chill out”, defy all odds by entering the 1988 Winter Olympic Games in Calgary, Alberta, Canada.

Below is the song.


It was written by Malik Yoba who played Irving “Irv” Blitzer the team’s coach.

The song is about now unbelievable it was that a group of Jamaicans who have never experienced snow, managed to step out of their comfort zone to prove how pliant we Jamaicans can be.

This passionate display of strength and “stick-to-it-tivity” bought them a position in the 1988 Winter Olympic Games.

The team members referred to in the song are actually story bound and were played by:

And was coached by Howard Siler from the US.The song was done by a group of ladies called “Worl-A-Girl”. They are a hip hop group with a R&B and reggae flavor. The

Jamaican Bobsled Chant was one of their most popular recordings.

If you have never seen the movie, this would be a good time, I leave you with this quote from the movie;(Sanka Reveals a hot water bottle nestled under is shirt)