The Mystery Of Jamaican Cotton Tree 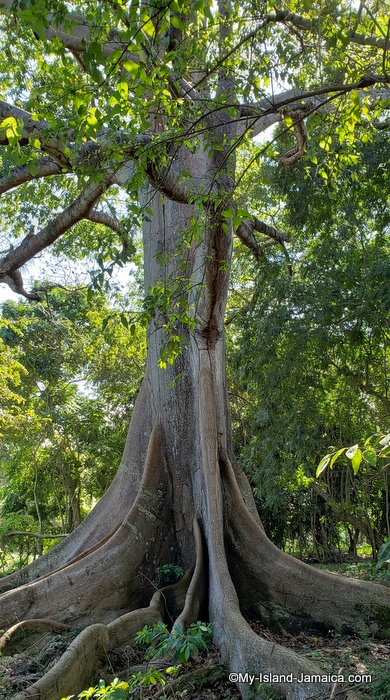 This imposing tree, the largest in Jamaica for sure, has, from an early age, captured my imagination.

And later, after learning about the tales and beliefs surrounding it (was passed from my foreparents and community), I was even more captivated.

Today, I'll take a deeper look into the history, mystery and wonder of this spectacular tree, with excerpts from Senior; yep, the same tree that Phillip Henry Gosse called the Pride Of The Jamaican forest, in his book, The birds of Jamaica.

The Cotton Tree (also known as Silk Cotton) is a huge, majestic tree, the largest in Jamaica, was used for making dugout Canoes in the past.

By thew way, a canoe measuring 29 meters by 2.4 meters made from the Cotton tree, was reported by Columbus from Jamaica.

It is regarded as a sacred tree in both Africa and the Americas, a symbol of long life and continuity, traditionally held in awe and reverence as the dwelling place of spirits.

The Lokono Arawaks of Guyana call it the komaka and said that living creatures were formed from its scattered twigs and bark. The Tainos referred to it as 'guasina', meaning ‘the dwelling place of spirits’.

It is also regarded as sacred by the Mayas of Guatemala and is the national tree of that country.

The Ashanti of Ghana call it the ‘God tree’, a name by which it is also known in Jamaica. Myal ceremonies were traditionally conducted around the Cotton Tree, and specific types of Duppies such as Whooping Boy are said to dwell at its roots.

In former times before a Jamaican Cotton Tree was cut down, permission would be asked of the spirit believed to dwell within the tree and an offering made. Rum would also be poured.

There are many stories of mishaps occurring to people who cut even a limb of the Jamaican Cotton tree before taking such precautions.

Size & Dimensions Of The Cotton Tree

Its girth and height up to 40m (131 feet) high make the Cotton Tree an imposing and conspicuous element on the landscape wherever it grows.

From its huge, straight trunk, which can grow up to 6 ft, it sends out spurs in all directions; its crown rises high into the air above surrounding trees.

Thus it can be seen for miles around and from far out at sea; indeed, Cotton Trees used to serve as markers for sailors.

The tree harbours on its branches a great variety of wild life which includes Orchids, Wild Pines, parasites, birds’ nests, creepers - which also contribute to its almost supernatural appearance.

Unlike most tropical trees, the Cotton Tree shed its leaves and for several months presents a bare appearance.

In spring, the creamy-white flowers appear, closely followed by the young leaves. Next comes the green pods which eventually ripen and burst, revealing the silk cotton. It was once widely used for stuffing pillows and upholstery.

The silky creamy cotton (enclosing black seeds) will often be seen floating in the vicinity of the tree before descending to earth.

Cotton from the Silk-cotton Tree as well as from the Sea-island cotton shrub was spun into cloth by  The Tainos. See also: The History Of Jamaica

Many Cotton Trees in Jamaica have been noted for their age and size, one of which was the so-called Tom Cringle's Cotton Tree on the Spanish Town Road at Ferry on the border of St. Andrew and St. Catherine.

A visitor in 1850 described his encounter with another giant one, this one was at Yallahs, St. Thomas, claimed to be the largest in the island then.

‘Many of its branches are as large as good sized English oaks and elms, as are also its roots which rise above the ground and run on the earth’s surface. I paced the ground under its branches that made a diameter of 240 feet [73m], and of course a circumference of more than 800 feet [248m]. We measured its trunks, four feet [1.2 m] from the ground by a string, which encompassed the buttresses as well as the trunk itself, and found it 72 feet [22m].’

The fact that cotton trees will live for hundreds of years contributes not only to their size but to their legendary nature.

It was one of those giants that came to be called Half Way Tree, the name of the capital of St Andrew.

The Cotton Tree growing within Fort Charles at Port Royal is said to be at least 300 years old; its roots extend beneath the foundations of the 1699-1702 structure.

By the way, it is worth noting that the historic treaty between Cudjoe of the Maroons and Colonel Guthrie on behalf of the English forces was signed ‘and all the solemnities attending it’ under a large Cotton Tree growing in the middle of Maroon Town at the entrance of (what was later called) Guthrie’s Defile!

The tree was ever after called Cudjoe’s tree, and held in great veneration, we are told.

The one above was sighted in Green Island near Calico Jack's Pirate Island, but I grew up with one just outside my grandma's house that the entire community respected; maybe not as much as the arawaks and earlier settlers, but it was also a notable landmark in the community.

We would, for example, say, 'Meet me at the cotton tree'.

And so, it with a heavy heart that I tell you some manic cut it down, for absolutely no reason, sometime last year! 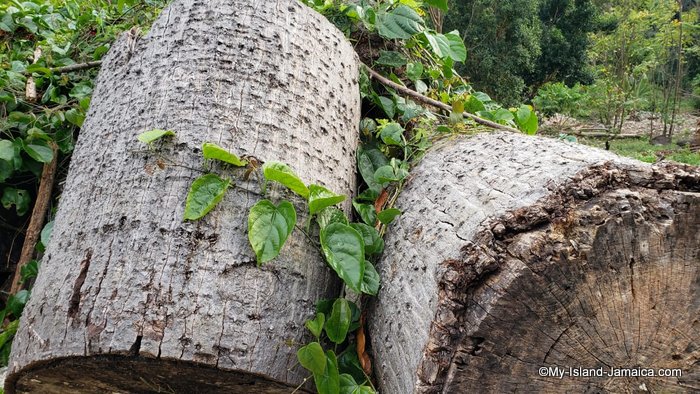 At the least, I am hoping to find someone who can make productive use of these logs. If interested, please let me know.

Other Pages Related To The Cotton Tree In Jamaica