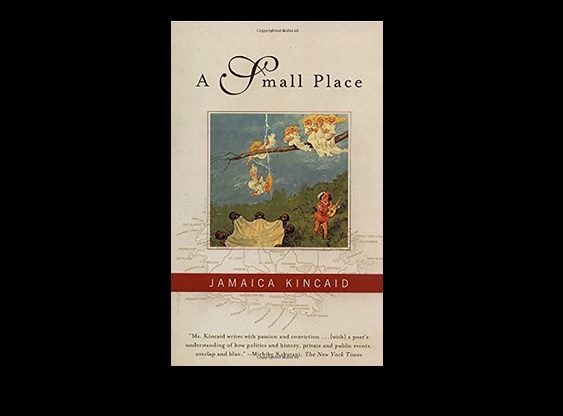 Jamaica truly is indeed a wonderful country, it is no wonder that Elaine Cynthia Potter Richardson would adopt it to be used as part of her name when she was 24 years old and writing for the New Yorker magazine.

Jamaica Kincaid would be her choice and mainly because she wanted to conceal her identity as a writer. Surprisingly enough, you would think that she had some strong Jamaican roots but that is certainly not the case.

The acclaimed Jamaica Kincaid was in fact born in St. John’s, Antigua. She had a strained relationship with her mother from an early age after her siblings were born. At 17 years of age she was sent to the United States by her mother to work as an au pair and later went to college and started her illustrious writing career.

If you love controversy and aggressive freedom of expression, you would most likely be a fan of A Small Place by Jamaica Kincaid.  She has been highly praised and heavily criticized for her writings which are described as being somewhat aggressive in nature. In fact, this books was actually seen as an attack on the Antiguan government!

A Small Place, WHY?

A Small place would be the first non-fiction book that she wrote. You may be wondering, why she wrote this piece.  Jamaica Kincaid decided to write about her experiences while growing up in Antigua and so the book was published in 1988.

Featuring aspects of corruption of the Antiguan government at the time, British colonialism, the tourism industry, along with her personal experiences, the book has four sections.

An expose maybe, revenge may be, being brutally honest? You decide!

A vacation at one of the Caribbean island’s white sand beaches, sipping martinis or strawberry daiquiris sounds great, doesn’t it?

Sometimes though, these nice place’s you visit can be absolute horror for the locals who live there. Lets take a closer look at what Jamaica Kincaid has to say in chapter one of her book.

She starts with a hypothetical tourist who is too busy with the formalities of travel and a luxury hotel to even notice the truth behind the dilapidated library lying in ruin after 10 years of an earthquake.

New! Get The Book

Now a best seller on Amazon, A Small Place Jamaica Kincaid is currently on special there. You can check the latest price here.

While on a guided tour of the island these "ugly people", as she calls them,  often overlook contrasting views of the lifestyle of the rich such as the enormous mansions with the simple and deprived locals who watch in envy, hoping that someday too - they can be a tourist.

You will find that in section one of a Small Place, Jamaica Kincaid depicts tourism as being very profitable for the government but the returns for the people who are vested in the business are very minimal, almost disenfranchised if you will.

She strongly suggests that Antiguans who are at the very root of tourism industry and are responsible for the gains to be had, but the least to benefit.  At the same time, tourists who visit the island are totally ignorant of this dark fact beyond the beauty of the white sand beaches and the luxurious hotels.

There are some things that will be forever remain in your memory and Jamaica Kincaid was no exception.

Let us take a look at the next section of her book where she recounted some memories.

In this chapter she highlights her memories of the Antigua she once knew, the colonization era by Great Britain.

Recalls of racism, and being made subject to the English culture, are depicted throughout this chapter. Etched in her memory, the Barclays Bank for the white-only elite and the royal visit of Princess Margaret which created quite a buzz.

She depicts a case of colonization of the mind of Antiguans.  Despite the untoward behaviour of the British, the English culture was still highly revered.  She had a problem with the people being only able to express themselves in the colonizer’s language and concluded by trying to establish a connection between the colonialism in the past and the then present impoverished state of the country.

Section III -  Antigua Then And Now

This section looks at Antigua’s present state. This chapter is actually the longest in the book. You will see that Jamaica Kincaid starts by trying to decide if things are better in the current state - or if the past was in fact better.


A Library In Need

She reverts to the state of the old library which she adored as a child and found solace there as a means of escape and the fact that the rich elite members of the Mill Reef Club could have easily funded the project.

She describes a kind of hostage situation where they would only assist if the old library is rebuilt in an attempt to retain its former colonial splendor and grandeur.

She expresses dissatisfaction with the Minister of Culture’s lack of enthusiasm regarding culture and the effects of the lack of education on the younger generation.

She speaks out strongly against the abuse of power and corruption by the government. Corruption is so common place within the government that officials who do not participate are viewed as outcasts or downright stupid rather than being commended for being honest.

She speaks of political history and fears of the future by Antiguans leading to a possible a change in the political landscape.

Yet, despite all the atrocities that she highlights, she concludes the book on a much lighter note. Let’s look at chapter 4, the final chapter.

Here she starts the chapter by elaborating on the physical beauty of the island; almost unmatched in her eyes, like a well-set stage.

She believes Antiguans should view this as mixed blessings as the beauty of the island compensates for the harsh realities of poverty that they suffer.

Antiguans, she believe, are no longer victims as the slaves who were brought there, but now regular human beings just as anyone else in the world.

New! Get The Book

Now a best seller on Amazon, A Small Place Jamaica Kincaid is currently on special there. You can check the latest price here.

No Jamaica In Jamaica Kincaid

As you can see by now, there is nothing Jamaican about Jamaica Kincaid, unless of course she was going to also adopt the passion for freedom of expression :-)

In a nutshell, you could conclude that A Small Place Jamaica Kincaid was about personal experiences and exposing corruption and racism in Antigua.

These are indeed big issues for such A Small Place!

Other Pages Related To A Small Place Jamaica Kincaid