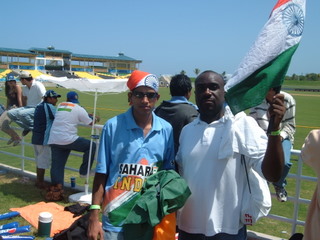 Our motto, "Out of Many, One People," captures the essence of our rich Jamaican heritage. Even though people of African descent make up over 90% of our population, other ethnic groups like Indians, Chinese, Germans, Jews, and Syrians/Lebanese makeup parts of who we are as a people.

In 1513, the first Africans came to Jamaica to work as servants for the Spanish colonists.

The sugar revolution, led to a severe labour shortage and as a result, Africans were imported to the island. Throughout slavery, African slaves were brought in frequently, which is the reason most Jamaicans are of African descent.

The Maroons are direct descendants of the African slaves who were set free during the war between the Spanish and English in 1655 or who ran away from the plantations during English rule. The Maroons fought many wars with the English before they eventually received their freedom.

After slavery was abolished, Africans were brought in as indentured labourers to fill the gap that slavery left. The parishes with the highest concentration of these volunteer workers are thought to contain the majority of the remaining elements of African culture. One of the most well-known rituals still in existence is the Kumina ritual of St. Thomas.

One of the majority ethnic groups in Jamaica is of Indian descent. They came as. Indentured labourers came between 1845 and 1917. The Indians came to Jamaica to make a "fortune" and start better lives for themselves back home.

Irish Jamaicans are a significant minority ethnic group, with population estimates ranging from 100,000 to 200,000. The vast majority of Irish-born Jamaicans are also of African descent.

During the British Lord Protector Oliver Cromwell's conquest of the island in the middle of the 1600s, the Irish made their initial foray into Jamaica.

Between 30,000 and 80,000 Irish are thought to have been transported from Ireland. A quarter of Jamaicans identify as Irish.

The Chinese population in Jamaica makes up a small percentage of the population. In 1849, the first Chinese people arrived.

Following the emancipation of the slaves, the Chinese were brought in as indentured labourers to work on the sugar estates.

Although some Chinese immigrants returned home to marry, others intermarried with Jamaicans of other ethnicities, adding to the racial diversity of the island.

The Germans arrived as forced labourers. The Colonial Government of Jamaica adopted a plan to settle European peasants on the island after emancipation.

The German settlers had to learn how to plant food crops and speak patois to survive. Except for a few words that only the elderly know and use, there is currently no German spoken. A few German surnames have persisted, including Hacker, Eldemire, Wedemire, Grosskoph, Kleinhans, and Schleifer.

The first European to land in Jamaica is thought to have been Christopher Columbus. The town of Sevilla la Nueva (New Seville), located on the north coast, was established in 1509 by Juan de Esquivel as the first permanent European settlement.

By sending indentured servants and prisoners to Jamaica, Cromwell increased the number of Europeans living on the island. Two-thirds of this 17th-century European population were Irish as a result of the wars that were raging in Ireland at the time.

Tropical diseases, however, prevented there from being more than 10,000 Europeans until around 1740.

The first Jews arrived on the island between 1494 and 1655 when Spain controlled it. These Jews were from Portugal and Spain.

General Venables noted the presence of many "Portuguese" in Jamaica at the time of the British conquest of the island in 1655. After the win, the Jews were permitted to stay and they started to openly practice their religion.

Immigrants from the Middle East started coming to Jamaica in the last decade of the nineteenth century. The majority, came from Lebanon, while the rest were from Bethlehem, Palestine, and Damascus, Syria. The main justification given for leaving the Middle East was Turkish oppression.

I am sure that I might be missing a few other minority groups here, however, this just shows how ethnically diverse Jamaicans are. I am convinced that if most Jamaicans did an ancestry background check, they would be pretty shocked at the results.