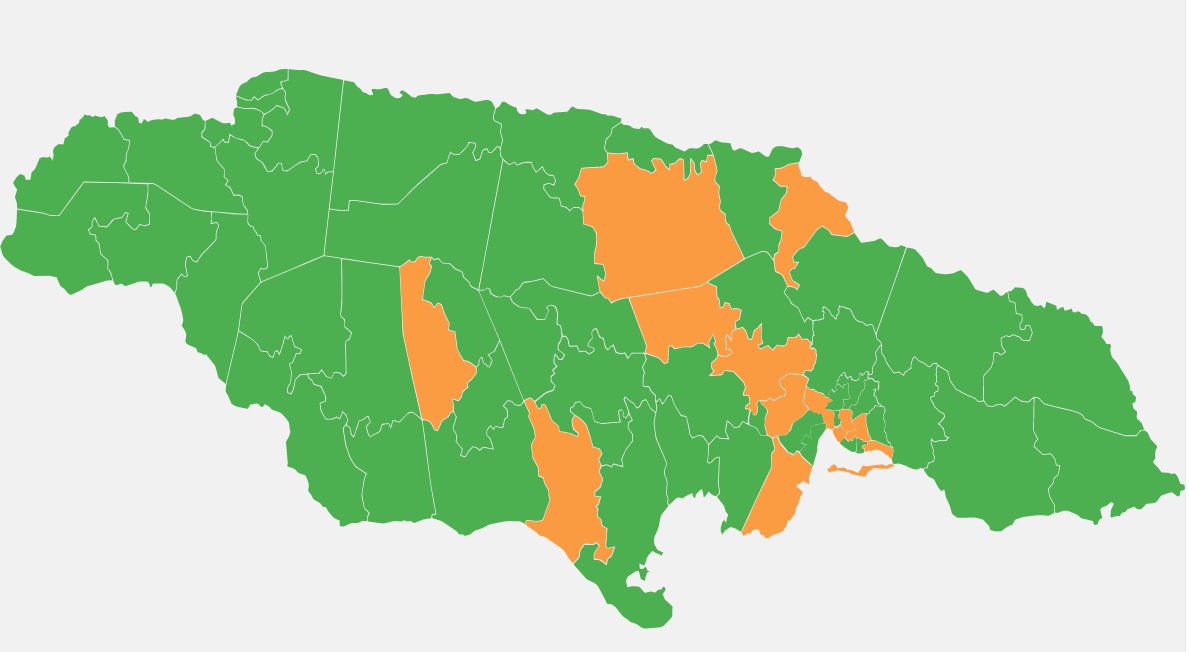 Jamaica Election 2020 - As It Happened
By Deon Clarke | Associate Writer

The highly anticipated day, Thursday September 3, 2020, arrived and Jamaicans headed to the polls as early as time would allow to elect their parliamentarian representative and ultimately new government.

Sixty three (63) positions were up for grabs. This is how it went...

Polling stations across the island were officially opened at 7:00 a.m.  Persons who had not voted by 5 p.m. but were in line were still allowed to vote.

No one was exempted as allowances were made for persons who were Covid-19 positive to exercise their right to vote under special conditions during the hours of 4 p.m. to 5 p.m.

Two major factors of rains and Covid-19 were expected to hamper voter turnout though.  And so, from earlier in the week, voters were encouraged by the political parties to take their umbrellas due to expected heavy rainfall.

The wearing of masks was mandatory, social distancing of 6 ft and sanitizing protocols were to be observed by voters.  Voters who did not have their ids were still allowed to vote under a swearing process.

Voting started and continued in all polling divisions. Campaign managers, runners and volunteers decked out predominately in their green and orange were busy like bees trying to get the voters out in their numbers.

The elderly and expectant mothers were given priority. Supporters for both major political parties, the Jamaica Labour Party (JLP) and the People’s National Party (PNP), were also decked out in their colours; green for the JLP and orange colours for the PNP; the only intent - to mark their X beside the bell for the JLP, or beside the head for the PNP.

For the most part, the rains that were forecasted, held up. Reports were that voting got off to a slow start in some polling divisions but picked up during the afternoon hours.

There were also reports of long lines as voters waited to cast their votes, some due to machines not working, some due to workers operating at a slow pace at times. This also affected a few persons as they left and couldn’t be bothered by the long wait.

Social distancing, we understand, was an issue and in some aspects, protocols were completely ignored, but at the end of the day, the voting was completed, which brings me to the next point...

As you can imagine, expectations were high for both parties and even the independent candidates as the results started to roll in.  Dr. Peter Phillips, the leader of the PNP had announced earlier in the day, when asked by a media rep, that if his party lost the election, he would be stepping down as leader of the party.

This sent a wave of speculations as to what was happening with the PNP;nevertheless, the evening progressed.

Some supporters were still gathered at the polling stations while others like myself were at home glued to our televisions or cell phones to get the final result.

I must say, that as the results came in, it was quite clear that the PNP was in serious trouble. The numbers were not looking great for them at all. I started hearing pot covers knocking and horns blowing on the outside as JLP supporters started to cheer and celebrate the seemingly inevitable.

A number of the PNP powerhouses were seriously lagging behind the JLP, such as Peter Bunting (one of the vice presidents and possibly next leader of the PNP) in Central Manchester, Ian Hayles in Western Hanover, Lisa Hanna in South Eastern St. Ann, Wykeham McNeil in Western Westmoreland, Richard Azan in North Western Clarendon, Fenton Ferguson in Eastern St. Thomas, and the list list goes on.

Another big surprise was the parish of Westmoreland which traditionally is 'PNP Central' but all constituencies changed from orange to green.

By about 8:20 p.m., all the above were declared losers, except Lisa Hanna who was barely hanging on and ultimately won by just 14 seats in the preliminary results.

By 9:00 pm, if there was ever any doubt, it was quite clear that the JLP had won by a crushing defeat of the PNP with 49 declared seats to 14 for the PNP.

A landslide victory indeed for the JLP!

Jamaica had turned green, not just in one or two constituencies, but for the most part, right across the island, Jamaicans had spoken and made it resoundingly clear that the Jamaican people were, at the least, least happy with the PNP administration.

Prime Minister Andrew Holness in his victory speech, with some apparent humility, stated that it was the people of Jamaica who had won and vowed that he will not take them for granted.

He also, in an apparent clear message to his own representatives,  that there is no place in his government for corruption.

Of course, you know by now that JLP supporters will be in full celebration, Covid19 or not, and that will continue for a while to come.

It is certainly a time for the PNP to do some introspection and they certainly have some decisions to make. The president, Dr. Peter Phillips, who was gracious in defeat, has already indicated that he will relinquish his post as a consequence.

As the country moves forward though, it will take effort of all Jamaicans to rebuild the country as we grapple with an ever bigger problem, Covid19, the worst global pandemic of this century.

WATCH VIDEO: Television Jamaica had impressive and comprehensive coverage of the results as they came in. Take a look!