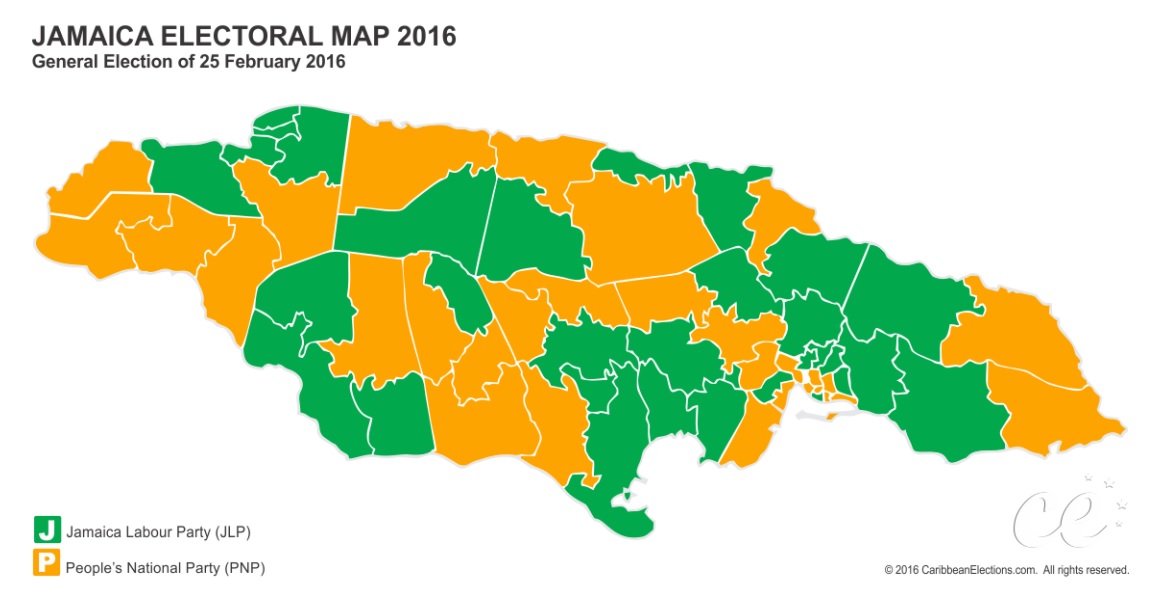 On august 6th, we 'donned' our national colours (black, green and gold) to represent for our island during the independence period. That’s barely over and now we are in colours again; albeit for a different reason; The General Elections have been declared!

The incumbent Jamaica Labour Party (JLP) with their green clad supporters are being challenged by the orange clad supporters of the opposition, Peoples National Party (PNP).

These are the most dominant colours in the peoples’ dress code on the streets. Everything is either in green or orange; from hair to shoes, shirts, dresses, nails, makeup, jewelry and socks all feature one of these colours.

If you know Jamaicans, you know we throw a party anywhere so each party puts its message to music and this upbeat sound blares from ever specially adorned motor vehicle on the campaign trail.

How often are elections held in Jamaica?

Jamaica’s general elections are held on a five-year cycle? However, since the election date is not fixed, the prime Minister at the time may decide to call an election even before they become due.

In addition, the term may be extended due to extenuating circumstances such as a state of emergency or national disaster.

Which political party won the most election since 1944 in Jamaica?

Have you ever wondered which political party has won the most elections in Jamaica? Well if you guessed the PNP, you’re right.

Which organization is responsible for conducting election in Jamaica?

The organization that has the responsibility for conducting elections in Jamaica is known as the Electoral Commission of Jamaica (ECJ). It ensures that the electoral process is free from political influence. The Electoral Office of Jamaica (EOJ) carries out the executive functions ofthe ECJ.

The commission reports to parliament and is funded by the government of Jamaica. They are the ones who compile and maintain the country’s list of eligible voters (individuals 18 yrs and over).

They also prepare an official voters’ list every six months, train election day staff, print the ballot papers, determine which group may be declared a political party and administers the electoral funding and financial disclosure requirements for political parties.

The ECJ through the EOJ has many other critical functions which make the election process possible in a manner that serves as a reliable reflection of the will of the people.

What is the role of the Electoral Office of Jamaica?

The Electoral Office of Jamaica (EOJ), is the executive body of the ECJ which carries out day to day activities to ensure that the concept of “One Man One Vote, Same Man Same Vote” holds true.

They ensure that elections are free and fair and free from fear and voter intimidation.

How long does a prime minister serve in Jamaica?

A prime minister can serve for up to five (5) years (as indicated above), but can be reelected to office multiple times.

There is also a possibility that he/she may choose to call an election before the expiration of the five-year term since we do not currently have a fixed election date.

How many constituencies are in Jamaica?

There are currently 63 constituencies in Jamaica (across the 14 parishes) translated into seats in the House of Representatives (lowerhouse of parliament).

Each individual who wins the contested constituency is referred to as a Member of Parliament (MP).

What electoral system is used in Jamaica?

Therefore, each constituency is counted singly and the party that wins the most constituencies at the end of the counting of ballots has won the election and has the most seats in parliament.

How are leaders chosen in Jamaica?

Political leaders, including a prime minister is first voted for by their delegates at their party conferences as the need arises. This person is then declared leader of said party given that he/she has won the election. When the national elections are held, this leader is then sworn in as prime minister.

The Prime Minister then selects leaders for the various ministries of government from his slate of victorious MPs or from individuals who are selected (not elected) to serve the senate or upper house.

The individuals from the upper house is known as a senator. Some ministries such as the Ministry of Finance may only be led by a MP.

NB: All aspirants to the office of member of parliament must be duly nominated on the designated day of nomination adhering to the stated requirements.

Is there anyone else you will hear about during an election?

This person helps to monitor the behaviour of the political parties on the campaign trail. The ombudsman tries to keep the campaign respectful by having the contestants sign a Political Code of Conduct.

This is basically a document that says each party/ contestant will be on his/her best behavior and will ensure same from their supporters.

If you are Jamaican and want to check to see if you eligible to vote, meaning, to confirm that your name is on the voters' list, I suggest you click this link and do a query on the ECJ website.

It will also show you where you should go to cast your vote.

Back to top of Jamaica Election Q&A

That's it, I hope you have a better and deeper appreciation of the election process in Jamaica.

But I'm standing by to answer your additional questions! Please use the comment below to share your feedback or ask your question.

Other Pages Related To Jamaica Election Question And Answer

Back to top of Jamaica Elections