The Jews In Jamaica
Their History & Heritage


The Jews In Jamaica
by Wellesley Gayle

In a most fitting comment to the response on Are Jamaicans Africans?  Dr. Olga Graham shared the following notes relating to the Jamaican Jews.

Thank you for your brief and to the point article on Jamaicans.  However, you omitted a very important part that formed the inhabitants and ancestry of Jamaicans.

It is that of the Sephardic Jews who came over from Spain with Christopher Columbus ( real name: Christobal  Colon--from where the word colony comes from) and thereafter.

These Sephardim decided to make Jamaica their homeland, and in fact built the first Synagogue in the Western world.

The Sephardic Jewish community was very instrumental in the economic establishment of Jamaica up until the present time; although their population in Jamaica has been decreased from the l970's.

The Sephardic Jews inhabited Jamaica during and after the Arawak and Tainos and before the British.

In fact, it was the Sephardic Jews who helped Lord Horatio Nelson to capture and colonize Jamaica - before the unfortunate days of slavery occurred and Africans were forcibly brought to Jamaica.

It would be good of you to correct this oversight as it is certainly recorded in international History books -- much too late to omit this section of Jamaican History.

Well, that prompted me to do some research and was equally amazed at the history, heritage and contribution, then and even now, of the Jews in Jamaica.

Did you know, for example that...

The History Of Jews In Jamaica

According to Martin, in her book, Jamaica's Churches, the earliest Jews in Jamaica were Sephardics from Spain and Portugal who came with the earliest Spanish settlers and practiced their religion in secret.

In line of continuous descent, the Sephardic Jews predate any other families in Jamaica's history! They were here when the English conquerors arrived, and were, alone of the island's white population, allowed to remain, in undisturbed possession of their property and conduct of their occupations.

After the British take over of the island from the Spanish in 1655, the Jews were able to practice their religion openly. They were regarded as important in Britain's plans for settlement of the colony and by the Windsor Declaration of 1661, became ’full citizens of Britain’ having the same rights as any of her ‘natural born subjects'.

This allowed them to own property which was one of the incentives used to attract Jews and other colonists to the island.

The Jewish inhabitants of Jamaica were exclusively Sephardic until about the 1770's when Ashkenazic (Eastern European) Jews began to arrive in Jamaica.

Jewish immigration then appeared to have ceased or greatly diminished until the late nineteenth and early twentieth centuries when new immigrants came from Syria, Egypt and other middle eastern countries.

The following is a table, published by Institutute Of Jamaica, in The Jamaica Journal, Vol. 20, No. 2, shows a historical perspective of the Jewish population in Jamaica. 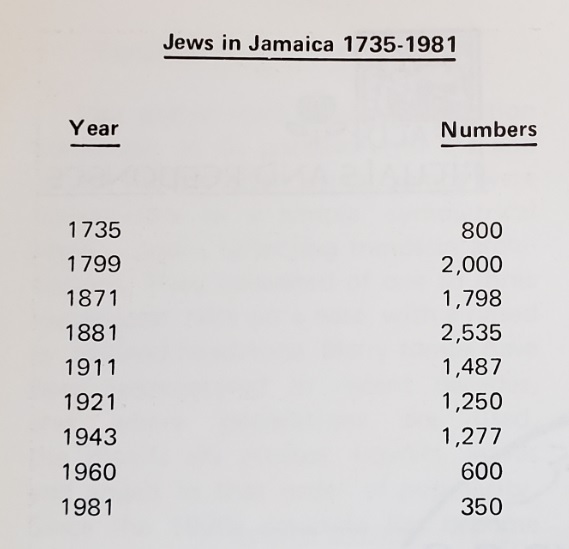 The Jamaican Jewish identity at this time in is dwindling though as there is little or no new blood entering the community.

Many of the orthodox Jews have either died, migrated and their descendants have intermarry, or converted to (mainly) Christianity .

But although it has been reported that only about 200 persons are religiously practicing Jews in Jamaica, a recent estimate suggested that approximately 20,000 persons still identify themselves as Jews in Jamaica.

Of course there is a much larger number, although mixed, who has some Jewish heritage.

By the way, among birth, ancestry, Jewish documents and tombstones, it is approximated that between 1492 to present day, over 420,000 Jamaicans are recorded as Jews.

The surnames Myers, Delisser and Matalon, all influential players in the Jamaican business landscape today, are said to be descendants of Jamaican Jews.

By the way, if not already done, be sure to read the colonial history of Jamaica and religions in Jamaica for even more insights.

Other Pages Related To Jews In Jamaica

Back to Top of  Jews In Jamaica