The Population of Jamaica
By Demographics 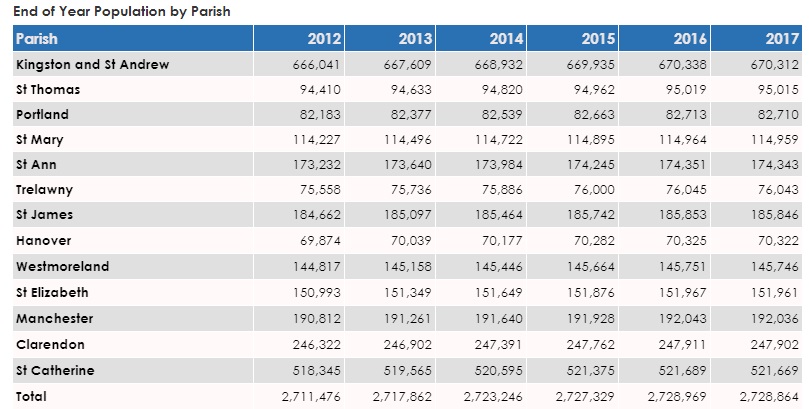 According to the Statistical Institute of Jamaica, Jamaica’s population stood at an estimated 2,726,667, as at December 2018, the most populated country in the Caribbean.

The following is the available information based on the Statistical Institute records on December 2017.

The breakdown was as follows

Back To Top of Population Of Jamaica 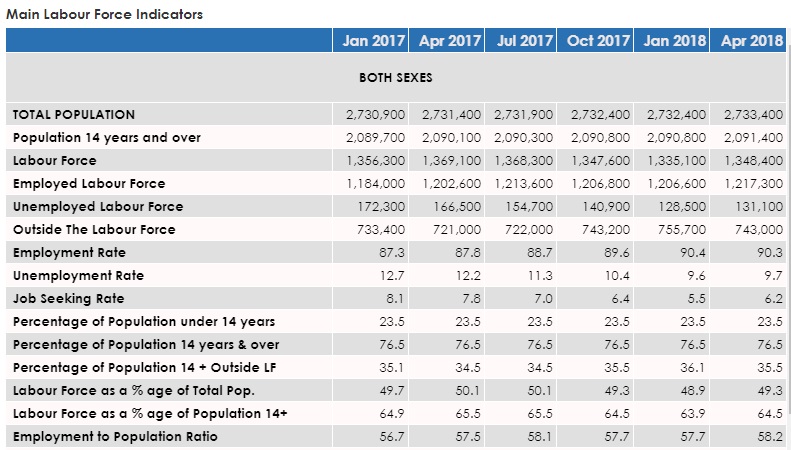 Population Of Jamaica, By Labour Force 2018

The Jamaican population consists of three main ethnic groups – Black, East Indian, and White. The other ethic groups include Chinese, Lebanese and Syrians.

Despite the population of Jamaica being dominantly

black, the people are bonded by the country’s motto "Out of many, one people".

The Chinese came to Jamaica in the 1800s as indentured labourers shortly after the abolition of slavery in 1834 to suffice the labour market.

Along with their labour skills, the Chinese took with them their entrepreneurial skills as well as their kitchen craft. The patties we all love today were inspired by the Chinese.

Today, you can find grocery shops, haberdasheries or supermarkets owned by a Chinese all around the island. Additionally, the chain restaurants, Juici Patties and Tastee Patties are owned by Chinese or Chinese descendants.

Read more about the Chinese in Jamaica here.

The original whites or Caucasians in Jamaica were the owners and masters of the slaves in Jamaica, and most were originally from Europe.

After the abolition of slavery, many of them remained and continued running their sugar estates. One such family was the Lawsons, who owned and operated the Sugar Estate in Hampden, Trelawny.

These groups of people are a mixed, usually between black and white. Many of the offspring were produced during slavery, as the 'Bakra' (master) would sleep with the young slave women.

A prominent offspring of this group was one of our national heroes – George William Gordon, whose mother was a slave. Bob Marley was one of those as well.

We Jamaicans are said to be among the warmest and friendliest people in the world. Nicknamed the sprint factory of the Caribbean, Jamaica has been consistently producing world class athletes for over 40 years.

Other Key Pages Related To Population Of Jamaica