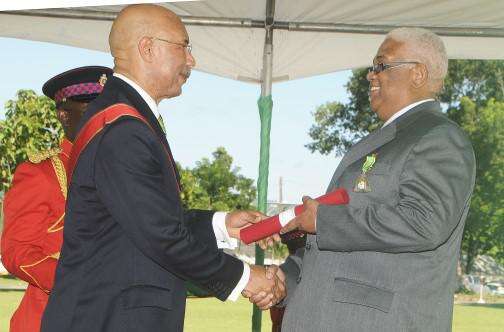 Volier’s career, which at that time, unknown to him would last just over half a century, began in the theatre programme at his school - St. Andrew Technical High School. His first role was in the play Rip Van Winkle being staged at his school.

The role came down to two persons, Volier and another student. How did he get the part? He dressed the part. Volier knew the dress was a way of transforming any character and so he used this to his advantage and it worked in his favour. Still fresh in his newfound passion, he played Miser Scrooge in the Christmas play.

In 1970, at just 19, he was chosen for his first commercial theatre production More Please by his high school drama teacher and renowned playwright and film-maker Trevor Rhone.

In 1972, he played a small but very memorable role in The Harder They Come, the movie on the life of famous Jamaican artiste Jimmy Cliff. Johnson plays the peddler (handcart boy) who stole Jimmy’s belongings when he got to Kingston. This remains Jamaica’s biggest movie to date.

Volier returned to doing plays. Boeing Boeing, Pillars In the Mind, Amen Corner and Rose Slip (as Gus) are his favourite roles, just to name a few.

What is surprising is that he didn’t earn much from these performances. These times he was working as a chicken farmer and in the Sugar Industry as a steel fabricator. After work, he would rush home to prepare for and get to rehearsals. This is true to the testament that doing what you love will never feel like work as he doesn’t remember ever feeling overwhelmed by it.

He credits that period of his life for really honing his skills, even more, something he couldn’t have paid for.

Volier Johnson did other theatrical productions as well.

Pantomimes are huge entertainment during Christmas and Volier has been in Tantaloo, Trash (Lord Bag and Pan) and Schoolers.

While he did many plays directed by Basil Dawkins, his performance in Toy Boy won Volier the Actor Boy Award for Best Actor for his role as Wrap Up in the play.

Volier’s most notable role in his 51-year career is his role in Oliver at Large, a made for television comedy written by Patrick Brown. Getting involved with the production in him quitting his other endeavours, focusing solely on his acting career.

From this Volier became a household name through his character Maffy, a venerable con artist who would get Oliver involved in harebrained money-making schemes which ultimately failed. Even now, people who were fans of the series still call him Maffy, his character in the play.

TRAXX, the sitcom, written and directed by Lennie Little-White starred Oliver Samuels, Leonie Forbes, Audrey Reid, Ronald Goshop and Volier who played the corrupt retired politician, Fishhead. Although the sitcom only lasted from 1998 to 1999, it is still one of his most memorable performances.

In the 1990s Volier worked on a few projects with Jambiz Productions.

In the 2000s, I remember Volier being on many advertisements for plays that were on tour all across the country. People got very invested in whatever character he was playing and it was a sure hit especially when he paired up with Oliver Samuels. The two were not only colleagues, but they were also friends and that translated well into the roles they played together.

He was also in the 2010 movie, Better Mus Come, starring Sheldon Shepherd which is based on Jamaica in the 1970s, which was fractionated due to political affiliations.

Every Friday morning on FAME 95FM was the programme Full House Friday. The collection of comedians, actors and media personalities all gathered in the studio and provided buckets of laughter for those listening. He along with Elva, Orville Hall, Francois St. Juste, Donae Ramgolam, fellow Lime Tree Lane alum ‘Johnny’ and many more bantered and laughed at and with each other which we thoroughly enjoyed.

In 2013, the Order of Distinction for services to the arts form was given to Volier for his contribution to Jamaican theatre arts and entertainment. The honour was bestowed on him by Governor General Sir Patrick Allen.

On July 9th 2021, the theatre and entertainment community and Jamaica as a country were given the devastating news of the passing of the theatre giant. Condolences and praise began pouring in from his peers who had become dear friends whom he had worked with for more than half his life and the wider society. He was 69.

Volier Johnson dedicated his life to entertaining Jamaica and ensuring there was a reason to laugh all the time. Even his funeral wasn't really a sad occasion. There his friends told of their many hilarious escapades. This cast a comedic atmosphere over what would have been a sad occasion. You could say Volier ‘Maffie. Johnson took laughter seriously.