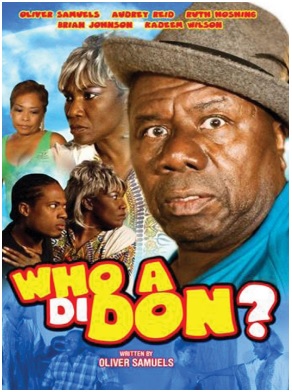 Oliver Samuels DVD - A Who A Di Don

If you are a Jamaican and don't love to laugh, I can tell you point blank… there is something wrong! I believe that Jamaicans are psychologically wired to appreciate a good piece of joke and trust me, you don't want a Jamaican to laugh at you… dem wi laugh yuh to scahn, bwoi I tell yuh ( they will laugh you to scorn)!

Now it would suit you best to learn a little patois to truly appreciate a good Jamaican comedy, so If you're not Jamaican, or Jamaican decent or don't have any Jamaican friends… go make one right now!

To Scroll Below And Watch A Top Jamaican Comedy Video
...Oliver Samuel's Flight 007!

I remember, as a child, watching the Lime Tree Lane series, which was a Jamaica comedy series aired on JBC (Jamaica Broadcasting Corporation), a Television in the late 1980s to 1990s.

I would crack up with great laughter when characters such as Miss Upton, Johnny, Ma’as Gussy and deaf ears Mary ( My favorite characters) open their mouths to speak! Loads of Fun!

Now, Lime Tree Lane is not the first and far from being the funniest comedy to come out of Jamaica, after all, we are/were home to legend playwright Patrick Brown and Jamaican comedians such as:

From these icons, some of the most hilarious Jamaican comedies of all time were born. Comedies like;

... are some of the vintage Jamaican comedies that lives on in our hearts. And by the way, here below is a video from one of Jamaica's most popular comedy icons...

I personally prefer comedies from the above greats, where the humor was a little more sophisticated, less vulgar and less boisterous, however, we also enjoy great comedies from the newer Jamaican comedians such as;

are far from boring and have young and old doubling over in laughter!

With newer comedies such as:

... Jamaicans will have more than a barrel full of laughter to last a life time.

But how can I mention Jamaican comedies, and not mention the comedies of my own childhood, albeit comedies that I was not allowed to watch because they involved “big people bizniz (business)!”?

And I could go on and on!

Jamaica comedy (the brand) have reached far and wide, with our actors and comedians now leaving our island paradise with regularity to preform in other countries, such as the US, Canada and Europe, no joke (pun intended) :-)

Now go ahead and find yourself a nice Jamaican comedy to watch and laugh your troubles away, even if its just for a while!

For an extended list of some of Jamaica's best comedy and theater performances, visit the LTM Pantomine's website here.

Other Pages Related To Jamaica Comedy