What is Kumina in Jamaica?
Its Origins & History 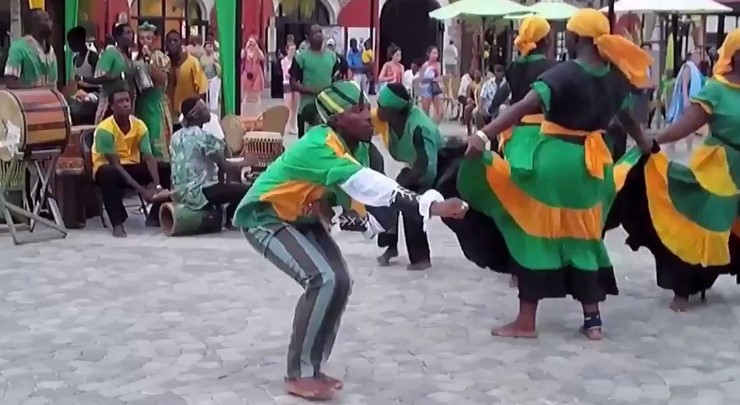 What Is Kumina In Jamaica? | (Photo: Prips Jamaica)

Our connection to our African ancestry comes through many of our spiritual practices. Kumina is one such example of this.

What is Kumina in Jamaica?

An afro-Jamaican cultural practice known as Kumina or cumina. It is a form of music, dance, and religion that is mostly practised by Jamaicans. Kumina is a traditional tool used to honour our African ancestors.

It is a kind of art that combines drumming, singing, and dancing characteristics which make is easily distinguishable through the movements and cadences used.

What is Kumina in Jamaica?

An afro-Jamaican cultural practice known as Kumina or cumina. It is a form of music, dance, and religion that is mostly practised by Jamaicans. Kumina is a traditional tool used to honour our African ancestors.

It is a kind of art that combines drumming, singing, and dancing characteristics which make is easily distinguishable through the movements and cadences used.

It's unclear when Kumina first appeared in Jamaica. But, it is thought to have existed in the eighteenth century and further developed in the middle to the late nineteenth century.

The African indentured immigrants from the Congo region of Central Africa who arrived in the 1850s during the immediate post-emancipation period were the first to have an impact on Kumina. In St. Thomas, where many of the immigrants settled, Kumina flourished. The parishes of Portland, St. Mary, St. Catherine, and Kingston, however, also became part of the religious movement.

Myal and Obeah, two Akan-derived traditions, continue to be diametrically opposed within the Kumina faith. While the term "Myal" is often used to describe the possession of Kumina dancers at religious rites, the Obeah man continues to be a master of science and the spirits.

After receiving extensive instruction from their predecessor in the feeding patterns, ritual practices, dances, rhythms, and songs of a variety of spirits, the leaders must be able to govern zombies or spirits and take on leadership roles.

What Happens in a Kumina ceremony?

The predominance of dance and ritual as means of religious and cultural expression is one of Kumina's distinctive characteristics. To open channels of connection with the ancestor spirits, dance and rituals are performed.

Singing, dancing, music, and sacrifices are all part of the rites. All of these are employed to produce the "Mayal" environment, which is conducive to spiritual possession.

When possessed by one of the three types of gods—sky, earthbound, or ancestral zombies—the last of which is the most typical form of possession—one is said to "catch 'Myal'. Each god can be identified by the unique dance moves performed by the possessed as well as the music and drum rhythms that it responds to.

A Kumina session's three most crucial components are drumming, singing, and dancing. Due to their ability to influence the spirits, the drums are thought to be the most significant. Instruments and songs used in Kumina Ceremonies:

Where in Jamaica is Kumina Practiced?

Kumina is still active in Jamaica today but is believed to be mostly practised in the Parish of St. Thomas, a parish highly associated with Obeah and spiritual works. Kumina dances are sometimes performed traditionally in stage shows and other cultural exhibitions.

References & Sources For What is Kumina in Jamaica?