What is the Largest Island of the Caribbean?
And Other Frequently Asked Questions 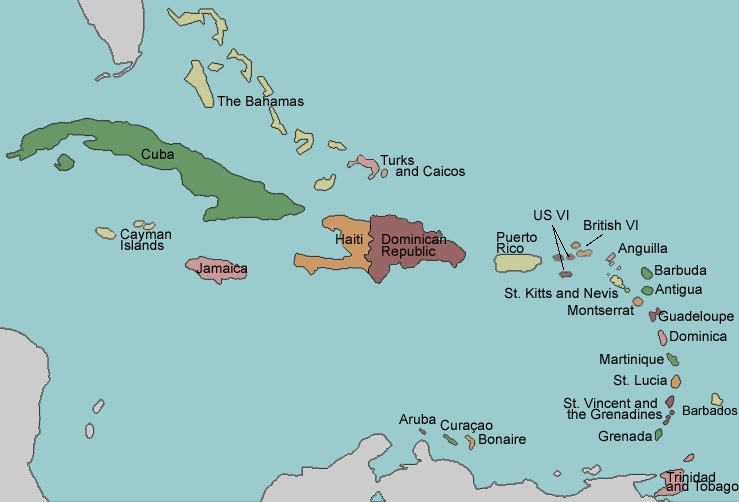 The Caribbean is very popular, and Jamaica is one of the most well-known islands. But, not much is known about the Caribbean other than, the music, food and people are all exceptional across the islands (might I add that this is quite true).

But a little history of the islands won’t hurt now, will it? So I’ll answer simple questions including, “Is Jamaica the largest Caribbean island?”

And since I’ve mentioned it, let’s start with that.

1. Is Jamaica the largest Caribbean island?

I was watching one of my favourite podcasts recently, and one of the two co-hosts was convinced that Jamaica was the largest and most populous country.

Well, Jamaica is nowhere close to being the largest island in the Caribbean.

What is the largest island in the Caribbean called?

2. What are the 5 largest Caribbean islands?

Although Jamaica isn’t the largest, it follows Cuba and Hispaniola(Haiti and Dominican Republic) as the third largest island in the Caribbean. These three countries along with Puerto Rico make up the Greater Antilles.

3. Why is it called the Greater Antilles?

The islands of the Greater Antilles are a group of larger islands located at the northern end of the Caribbean Sea.


The Lesser Antilles are the smaller islands located in the lower half of the Caribbean Sea, mainly to the east and south. Those islands are then split into the Windward and Leeward islands, a distinction made based on whether the countries are facing away from or toward the wind.

I always thought the difference between the Greater and Lesser Antilles stopped there, I was surprisingly mistaken. It is believed that the make-up of the islands is different.

There has also been various research on the native flora and fauna in each area with the visible distinction being seen in the way plants grow and mutate in each area.

When it comes to size and population, the Greater Antilles makes up for 90% of the entire population and mass of the Caribbean. The estimated figure for the Caribbean's population is over 44 million. The combined estimate of individuals in the 5 largest countries is Nearly 40 million.

4. Are the West Indies a country?

Good question. You might have asked a Caribbean person where they were from and they responded that they are West Indian. There is no country in the Caribbean called West Indies, it is instead a collective name for all the Caribbean islands.

The name comes from Christopher Columbus, who in “discovering” the Caribbean thought he had found a shortcut to India, but, it was, in fact, the Caribbean islands. Since then, the region has been known informally as the West Indies.

The Caribbean cricket team uses the name West Indies in international matches, independent countries don’t compete but, instead, players selected from all over the English Speaking Caribbean are grouped as one to make up the team.

5. What are the 7 Caribbean islands?

Seven! There are many more islands than that. Here are 35 of the over 700 independent islands or dependent territories in the Caribbean.

6. Why is Guyana a part of the Caribbean?

Although Guyana is a part of mainland South America, it is still a Caribbean country. This is because the country’s history is much more similar to that of the Caribbean islands than the other South American countries.

While they were all colonised similarly to us in the Caribbean, Guyana was colonised by the British much like many of the Caribbean countries making Guyana the only South American country whose official language is English.

Guyana is also a founding member of CARICOM, the collective of Caribbean nations that participate in mutually beneficial opportunities for all involved. In fact, the organisation is headquartered there.

The people of Guyana also share more ethnic and cultural similarities with the Caribbean than it does South America.

7. What is the wealthiest Caribbean country?

The dual island nation The Republic of Trinidad and Tobago is the wealthiest in the Caribbean and the third wealthiest country in the Americas following, USA and Canada.

8. What is the most beautiful country in the Caribbean?

All jokes aside, the Caribbean is a truly stunning collection of island nations filled with the warmest, most creative people, delicious food, breathtaking sites and an electrifying culture. Each island has its unique flavour which will make for the best vacation possible.

So my advice is to visit them all…starting with my personal favourite, Jamaica of course.

References & Sources For Largest Island of the Caribbean