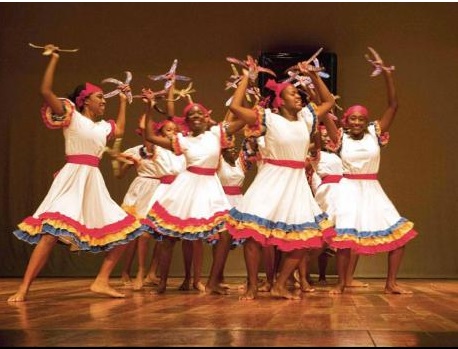 The National Dance Theatre Company (NDTC) is one of the longest-running dance companies in Jamaica. It all started in 1961 when 18 dancers from different dance schools, unknown to the world at that time were invited by national hero, Norman Manley to be a part of the Jamaica Dance Company. The group was a part of the entertainment at the Independence celebrations in 1962. In September of that same year, the dancers made the decision to leave the various dancing institutions they were a part of at that time and work together instead. It was then, in September 1962 that the National Dance Theatre Company was formed. Little did they know at the time but those 18 dancers and would become an integral part of Jamaican Music and Dance culture. At that time, the NDTC was jointly led by artistic directors — Eddy Thomas and Rex Nettleford.

The group’s relevant and imaginative coreogrpahy, dances and creates music using elements from our very diverse culture to tell strories of Jamaica. Their ever-expanding repertoire includes the dance traditions of Jamaica incorporated into modern and classical ballet forms. The dances are choreographed using the Jamaican folk forms as the source material combined with the Martha Graham principles of dance. This gives the Jamaican technique. This technique is used to tell many Jamaican stories from the very first piece The Legend of Lovers’ Leap (choreographed by Eddy Thomas) to their most recent piece Choke (choreographed by Orville McDonald). One of the most memorable pieces done by the NDTC is Kumina which was choreographed by Rex Nettleford in 1971. Having been established the same year Jamaica gained Independence, the NDTC gives a very unique view of our growth as a country. The dancers who participate voluntarily, have committed to the work of the NDTC and to assisting the efforts of the organization to bring Jamaica’s culture through music and dance to the rest of the world.

Over their 59 years of existence, the NDTC has performed in multiple countries and throughout the Jamaican Diaspora in places such as Canada, the Uk and the United States.

The NDTC currently has an extensive repertoire which is showcased annually in July/August at their annual season of dance. Each year new pieces of choreography and old favourites are intertwined to give a rich and invigorating reindeer of our cultural heritage. Of course, they also perform these pieces internationally and they now boast a studio of their own, a feeder school and many new faces. All participants who are essentially volunteers are continuing the tradition of being true to the preservation of something distinctively Jamaican and deeply cultural. Barry Moncriefe said it best when he addressed the group's 50th-anniversary celebration, "None among them the founding members could have predicted that the company would have accomplished all that it has,” Mr Moncriefe also highlighted the fact that the NDTC has, “managed to sustain interest in and support for Jamaican dance theatre over five decades, and is revered as one of Jamaica's most loved cultural treasures.”

Long standing and founding members of the group have pledged to remain resolute to the original vision which was to forge out of the Jamaican and Caribbean culture and life, an art form faithful to reality while being a part of a wider world and universal landscape of the creative arts.
Founding members such as Bert Rose have described the NDTC journey as “ wonderful.” He articulated that Rex Nettleford had a vision when the group began however no one knew that the company would have been so tightly woven into Jamaica’s national fabric.
As is typical of things in the embryonic stage of development, a deep and abiding commitment to the process to accomplish the vision. As such, the founding group did mundane tasks such as sweeping the stage, painting the backdrop, ironing their clothes or even running the box office. These things are no longer required.
Other noted changes over the years are the shift in the choice of musical genre and the incorporation of international choreographers like Cuban-born Edwardo Rivero Walker.

The founding patrons The Honorable Louise Bennet Coverley O.J., The Honorable Edna Manley O.M., The Honorable Edward Seaga P.C.. Mr Robert Verity C.D. and Ms Martha Graham would have been proud to have their names connected to this company even up to now. This is because the NDTC still functions on its foundational principles of excellence, honour, artistry, communication, transparency, family and integrity.

The NDTC represents the very best of Jamaica.